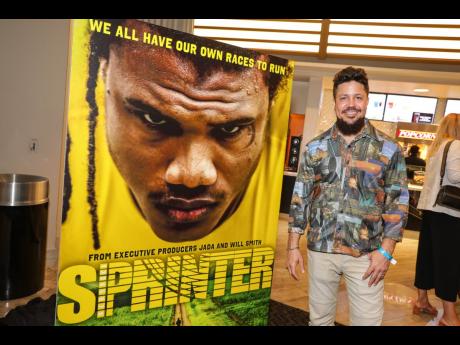 Contributed
Writer and director, Storm Saulter, poses alongside a banner of his latest film, 'Sprinter', while at the film’s United States premiere at the Grove Theater in Los Angeles, California in April.

With the influence of big-name producers like Will Smith and Jada Pinkett Smith, Sprinter got the Hollywood treatment on every level, including music. Recently, the motion picture soundtrack hit the shelves with a line-up featuring Jamaican and international artistes as well as contributions from some of the island’s own young composers.

Compiled and presented by Major Lazer group member Walshy Fire, the soundtrack also has contributions from local musician Jeremy Ashbourne, who the film’s director, Storm Saulter, credits with laying the foundation for Sprinter’s main score composer, Joe Trapanese. Trapanese’s composer credits are phenomenal. They include films like Tron: Legacy, The Divergent Series: Insurgent, Straight Outta Compton, The Greatest Showman, and the recently released live-action adaptation of Lady and the Tramp.

For Ashbourne, his involvement turned out to be more than credit on a film reel.

“It was a long process, and I learned a lot. I went to LA and got to spend some time at Joe’s project base, where he and his team work. I spent more time with his assistant, but I got to sit in on sessions with Storm and Joe when Joe was presenting his music. I got to take in that interaction,” Ashbourne told The Sunday Gleaner.

From Ashbourne’s perspective in the music corner, many forces combined to make the movie happen.

“People out here are used to having to man every gun, and they really get a feel of all the moving parts. To experience that from the aspect of a composer, it was a roller coaster. I got a chance to put down ideas; I had a whole concept. And my music, my ideas – maybe not on a literal level, but thematically – were a springboard for Joe to do his thing. It informed the substance so he could get to it quicker,” he reasoned.

The musician continued: “It was a great exercise, like a university course. I was standing over their shoulder at the mixing board as they were mixing the film, asking annoying questions. I was totally in it. [Saulter] didn’t need to get me involved. I contributed my energy and added to the whole thing coming together. It’s hard to quantify. I’m really grateful for all that learning. I’m honoured to be a part of the project.”

Experimenting with the ‘Finish Line’

More than a thematic assist to the main composer, Ashbourne is also credited as producer of Finish Line by Kabaka Pyramid, a song written specifically for the film.

Ashbourne’s original approach to that production was somewhat akin to music from the soundtrack of the triumphant boxing epic Rocky. However, “Storm suggested we get Kabaka on the mic, spitting this guy’s story in 90 seconds. I had not written it with that in mind, but I love experimentation,” he said.

Ashbourne and Saulter invited Kabaka into a meeting, where they gave an overarching synopsis of the young protagonist’s story. “We just dug into the kid, and Kabaka just soaked it all in, took two weeks, came back and nailed it. If it was a job he was contracted to do. he’d be completely within his right to charge the maximum amount.”

Finish Line was not included in the film but is part of the motion picture soundtrack and is a career highlight for Ashbourne. “It’s a wild ride. I learned a lot. And at the end of the day, you can put that on your résumé.”

The relationship between Saulter and Walshy is one of mutual respect. Walshy refers to the director as a visionary while Saulter relied on the globally popular producer’s ear for what’s good. “I rate what he’s done with his career. If Walshy says it’s worth listening to, other people will listen,” Saulter said.

Walshy got involved after the movie was already made. “Storm linked me and gave me a little pree – and the movie is just so good. It’s such a great movie. That’s when I had a conversation with him about what level of involvement I could jump in. That’s when we started to have conversations about music and choosing the songs.”

The prolific producer continued: “Yaw guh get whole heap of Jamaican pon it. When the artistes that are not Jamaican, but are supporting the concept and style of the movie, it just makes sense. Nobody nuh too pree where they come from so long as it matches. For those people that are going to be getting this, hopefully, they’ll look at it as they look at any big soundtrack – regardless of where the artistes are from or what genre of music it is,” he told The Sunday Gleaner.

Saulter concluded: “The soundtrack is fire, if I do say so myself.”