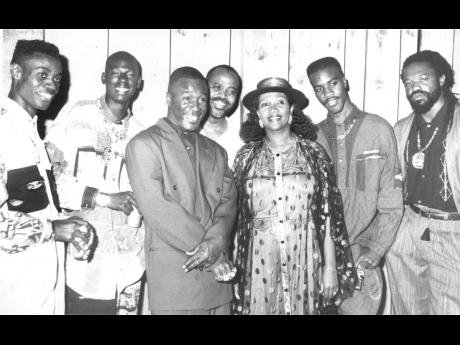 On his re-entry into in the wild world of the Internet, a space powered by social media, local superstar entertainer Buju Banton takes it back to basics. Last Friday, the entertainer released the brand new track, Trust, produced by highly respected, referenced, and notoriously obscure producer Dave Kelly. In this collaboration between veterans in the music game, residue from their foundation is evident. But perhaps a testament to their skill and innovation, some initial reviews reveal that while the song sounds like a nod to the ’90s, it can also pull the ears of Vybz Kartel fans, and other consumers of similar tastes.

Young producer Gahlxi likes the song. As the youngest participant in a Gleaner Entertainment forum held earlier this year, Gahlxi upheld the millennial perspective of the state of the local music industry – observing that there is a paradigm shift in the soundscape, likely encouraged by an absence of mentorship from the older generation of music producers. Pitted against his elder colleagues at the table, Gahlxi asserted that it was caused by their disinterest, or unwillingness to pass on musical knowledge to up-and-comers. Teaching themselves from the magnitude of mainstream, the lack of mentorship informed the rise of the new soundscape, ‘trap-dancehall’. In light of this disparity, there is one generation lamenting the success of the ‘classic’, foundational, heartbeat design of dancehall and the younger pushing for an evolution.

But Gahlxi really likes Trust. To his ears, the production accomplished what many argued could not happen in a time without willing teachers and students. He expressed excitement at the combination of older sounds with a fresh flow and relatable lyrics. To his ears, Trust could become an example of the old-school vibe that can be layered with new flavour – and enter the streaming races.

“With the attention span of the modern audience, you basically have three minutes to impress because they might not play it back. If you can’t have a song on repeat, then it doesn’t really make sense. And right now, I want to listen to it again. I want to share it now. It surprised me,” Gahlxi told The Sunday Gleaner. The 25-year-old producer said it ‘sounds good’, and believes the song can stand as demonstration that there can be symbiosis between the old and the new.

Dedicated fan knows that there are two Bujus – the dancehall version, beloved for hits like Battyrider, and then there is the messianic, culturally charged Til Shiloh version. But Buju did not always sing; deejaying was his original beginning. So for this turn around the table, fans can expect throws of nostalgia curiously layered with contemporary dancehall music inflections.

And so, with some good reactions that the new music sounds like a ‘90s track with Kartel influence, it is evident that it takes true mastery to recognise your limitations and excel within them, like what the Gargamel is doing. Attendees of his recently concluded Long Walk To Freedom Tour would hear that the singer’s vocals aren’t as sharp as they used to be – perhaps because unpractised after years of incarceration.

On Trust, Kelly managed to retain an old-school vibe on the track, with a riddim that beats steady like a healthy heart, and Buju took to the mic, deejaying with deep, throaty vocals that roll through the track like low growling thunder.

Along with the nostalgic sonic elements, there is digestible lyrical material for millennials. Forgoing the lyric video route, the distribution plan laid them in the bio section of the song’s official audio on YouTube – making it plain that the newly freed man wants everyone to hear exactly what he is saying. And the wary message is clear:

So family be careful who send voice note

A dem same one when tings happen dem a gloat

Stab you in yuh back an then them come tek oat

And ghetto life in general a real cut-throat

Wait till dem end up in a federal court, yuh feel mi!