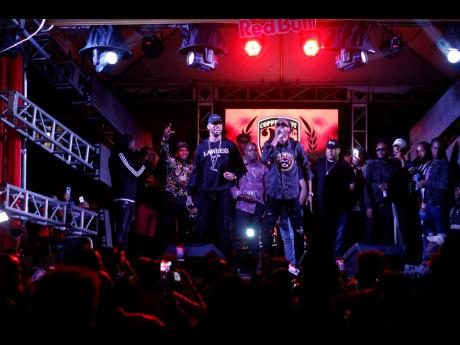 Stephanie Lyew
Cham and Bounty Killer take the entertainment to another level.

The stage, set front and centre of the Caymanas Golf Club on Saturday, came alive as celebrity guests of Coppershot Music delivered performances worthy of a 25th anniversary celebration. Coppershot Music’s dynamic duo of Marc Chin and Cutty acquired the audiences’ attention when the clock struck midnight, but the show got off to a slow start, with Noah Powa joining them onstage for the usual hype man antics.

It was not until veteran dancehall deejays Cham and Bounty Killer, along with members of Dutty Cup Crew like Looga Man and Chicken, led by Sean Paul, Leftside, and Ward 21’s Suku and Kunley took it back to the 1990s that patrons moved from the bars and outside of the reserved cabanas to get up-close and personal with the entertainment.

Cham, who told The Gleaner that he has been mostly touring and writing music since his last guest appearance on a stage in Jamaica, the February staging of Footloose, did his set justice.

“Coppershot Music is the only machine that could get me here quickly at this time of the year, and I leave promptly tomorrow for the Jamrock Cruise,” Cham said.

The brief performance of Another Level by Cham and Bounty Killer on the popular Madhouse Records’ ‘Bug Riddim’ had many reminiscing on the earlier years of dancehall. Cham’s catalogue was extensive, and he reeled off hits from the ‘90s, including Many Many, Back Way to a string of songs recorded on ‘Showtime Riddim’ and, later, productions like Ghetto Story and Wine.

The Lawless artiste even did a short rendition of Jamaica’s national anthem and had persons standing at attention. Of course, he could not leave the stage without delivering the latest track, We Survived, produced by Shaun ‘Coppashaun’ Anderson, one of Coppershot Music’s founding members. He noted that the song lyrics speak to what the party was being held to mark – a survival of the times. The uplifting lyrics motivated persons to hum along to the tune and raise lighters into the air.

Calling it their new anthem, Anderson said, “The track has been doing pretty well since its release in September. It gives sight to more productions that can be expected from Coppershot Music, whoever decides to do so in the new year. It will be about one label and one movement in order to survive many more years in the music business.”

Following Cham’s finale, the selectors returned to the previous operations in efforts to squeeze in a few ‘gyal tunes’ as per the requests of the guests, who remained after the artistes exited the stage. With the remarkable turnout, the sound system and its event organisers are considering making the event a staple on Jamaica’s already lively stage show calendar.