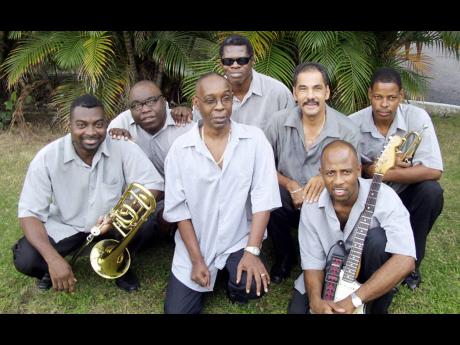 Fab 5’s Christmas in the Sun single was in rotation three years before the hugely successful album of the same name – produced and recorded by the band – was released in October 1992. The thought of not being able to relate to the European traditional Christmas carols inspired musical director and the band’s drummer and lead vocalist Asley ‘Grub’ Cooper to create music that local culture could appreciate during our own celebration of the season.

The single’s success is owed not only to the melodies about the food, Jonkunno, and poinsettia flowers as decoration, but to the various vocalists featured on the project, like The Stage Crew, which included the talented Gem Myers, who credits Cooper for his creativity in making the Jamaican concept of carols come to life.

“It was all Grub and the talented band,” Myers affirmed before letting Cooper take the lead in the interview.

“The idea of the North Pole, Santa Claus, mistletoe and snow did not present itself naturally to me. In my years of growing up in Jamaica, we always had our own little traditions that were not inherited like the history of Saint Nicholas from the British,” Cooper told The Gleaner.

“There was so much more to a Jamaican Christmas, from opening barrel to Grand Market celebrations across the different parishes, even the idea of relatives visiting from abroad, and about 80 per cent of that was captured in the lyrics for Christmas in the Sun. We wanted to spread love and good cheer but also did not want to give all of it at once, so we saved some for the following year,” he added.

Christmas in the Sun gave birth to more ideas for carols, and in the embryonic stages of the album, Cooper and his colleagues decided to create a catalogue of sweet reggae carol-type music that would make the diaspora – persons spread across the world – feel the Jamaican Christmas spirit.

Cooper said: “From the first idea, it was something that became of interest to other musicians, and when I told Frankie [Campbell] about it, he agreed. Why not try do an album? Because one song could not possibly cover the many traditions of Jamaican people. Because if Christmas in the Sun was something I attempted to sit and write, it would have been a long song with many more verses.”

The song, he noted, was an encapsulation of what we can and cannot deal with. In the first verse alone, the singers asks: “Have you ever, ever one day stop, to realise that our home is a tropical island paradise. Yes, we have problems but we can solve them? We have no problem with snow and ice. I have never had to ride in a one-horse open sleigh or watch Santa Claus and his reindeer fly away.”

Our home remains a tropical island paradise, he said, as the lyrics state.

“Christmas music may take a while to seep into one’s consciousness because it plays now and it is thrown away for the rest of the year, but the songs remain relevant,” he said.

“Some of us are receptacles for making these types of music; hopefully, when a Christmas song is released, it is embraced by the people and the diaspora, which will determine its success.”

The first year of the album – which included other hits such as Give Love This Christmas, Christmas in the Air, Christmas Jamaican Style, and Welcome Home (For Christmas) – was released, it received airplay, though limited. But over time, people became used to Fab 5 creating Christmas tunes that were played by everyone from corporate entities to churches, something he said, “we are really proud of; that has done well in recent years”. Approximately 10 years later, the second album released, A Jamaican Christmas Gift, contains a mixture of covers and originals.