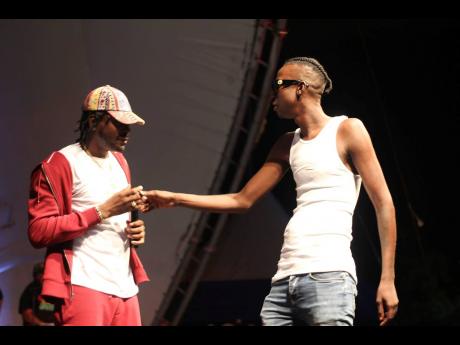 Stephanie Lyew
In the interest of time, Chi Ching Ching (right) runs on during Govana’s performance to share the microphone.

There is only one way to describe the Let Live Music Live concert Tarrus Riley hosted at the Emancipation Park last Wednesday – an example of professionalism at its finest. Not only did the performances begin on time, but the set-up of the stage, changeover of the bands and the behaviour of the artistes were deserving of applause.

“Time is the master,” Riley said to The Gleaner following the last performance at approximately 12:48 a.m. (yesterday).

Though the concert was given an extension past the expected midnight lock-off, there were several artistes backstage awaiting the chance to share their talent with the audience.

As Riley expressed prior to the show, which took a hiatus last year, it is always a show of support from persons within the entertainment industry, “myself and no other artistes have any complaints about the time; we go over the time and police work with we”.

“I am grateful it was incident-free, nobody fight, and not even a bad word cuss – it did nice – if we did get 10 more hour, it would have been too short because Jamaica full a talent and nuff artiste,” he continued.

Dancehall acts Govana, Chi Ching Ching, Dexta Daps, Kemar Highcon, Laa Lee and Capleton did an impressive job of working together as part of the finale. The show closed off when Dancehall King Beenie Man was ready to take the microphone – with a stage already filled with ­hitmakers ­jumping on the rhythm, Riley advised him to just give the ­audience a final word, which he delivered in a ­medley of songs in under one minute.

“When you see artistes like Beenie Man, Capleton, Govana … all the artistes dem a professional, so them know how to fix them thing, and a whole heap of up-and-­coming and veterans had a chance to shine tonight,” Riley noted.

About the cost to execute the show, he added: “To be truthful, we and Mr [Dean] Fraser deal with it. Don’t worry about the cost because it is not a money thing, as you can see, we never charge … but it is more than worth it.”

Other outstanding performers for the night included Ghost, Mr G and General Degree, who brought the old-school dancehall flavour to sweeten the deal; Junior Reid, Richie Spice and I-Wayne, representing for reggae and Jamaica’s talent in the genre at the international standard.

Speaking to The Glea ner on their way out of Emancipation Park, patrons, though wanting more, expressed gratitude to Riley as he made it a duty to sit and take pictures with the fans.

“We out here from early, everything kicked off on time and, overall, the show was an ­amazing ­display of talent. Another thing to highlight is the level of showmanship from the different instrumentalists. You could feel the love from the back of the stage where the band was, to the front, where the artistes stood. Me feel like me could go outside and pay to come in again …. . Yes, I know me never pay fi come in first time,” Oral Whilby laughed, and he gave thumbs up to the artistes.

Krystal Flowers added: “You could also feel the love between the artistes who closed the show … . It was a good Christmas treat for Jamaica. On a scale of one to 10, I give it a rating of eight, only because I wanted to see more from Beenie Man. Everything else was the cake, but that would have been the icing for me.”