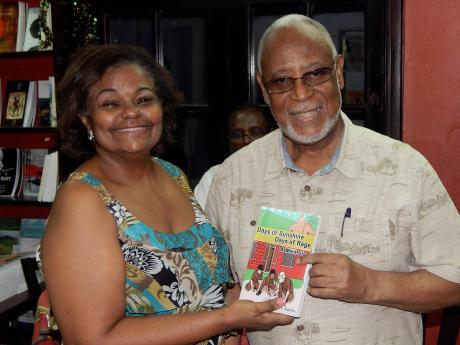 Michael Reckord
Joanne Simpson and Hugh Martin pose with one of the books launched at Bookophilia. 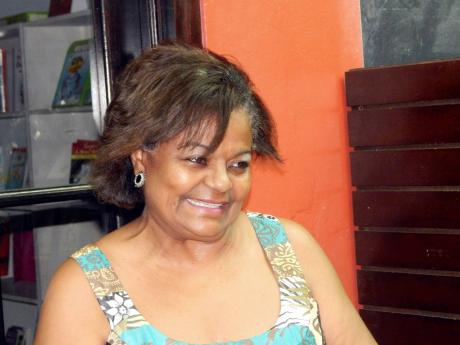 Michael Reckord
Joanne Simpson, the keynote at the launch.
1
2

If you weren’t given a copy of Hugh Martin’s recently published, aptly named memoir, Days of Sunshine Days of Rage, for Christmas, buy one for yourself for January, the universally acknowledged month for the remembrance of things past. Since you’ll probably be doing a lot of that, Martin’s book will be good company.

You’ll find his reminiscences particularly enjoyable if you’re interested in life in rural Jamaica, specifically the rural Jamaica of the 1950s and 1960s. The book begins with three-year-old Martin in an otaheiti apple tree on the fruitful five-acre farm in St Ann where he grew up, and ends when he is 18 and about to go to the Jamaica School of Agriculture.

When, at age 12, because of the quite unjustified brutality of his primary schoolteachers, he temporarily drops out of school, his mother asks him what he wants to be in life and he tells her, “Maybe a writer.” And he does become a writer – of poems, plays and short stories.

This is while he is at school and, later, while working as a journalist and broadcaster. During that time, he also becomes an actor.

Then, three years ago, retired from full-time work and with more time on his hands, he turned to writing books. His first, a novel, For All My Pains, was churned out in three months. The torrent of words continued and within the next two years he wrote and self-published not only the 363-page memoir, but also a 500-plus page novel, Dancing on the Auction Block.

The last two books were launched this month at Bookophilia and are available at that Liguanea, St Andrew, book shop and on Amazon. I haven’t yet read the second novel, but thoroughly enjoyed the memoir.

It is partly about the ethos of the countryside, but mostly about people – family, friends, acquaintances and even some he didn’t know personally.

The relationships involve both the sunshiny things – like family love, friendship, laughter, romance and sex– as well as the rage/depression-producing things like violence, abuse, betrayal, illness and death.

Here’s a taste of the romance:

“It is possible to love two women at the same time and [not] feel any guilt,” Martin states. He explains how: “That is if you are fifteen years old and you are not having sex with either of them.” That affair is made easier because he only sees one girl, Joanne, on weekends, while the other, Esmie, his classmate, he sees every school day.

But then a year later, we see him in another love triangle, this time involving Esmie and her best friend, Valerie. Things are more complicated, for the girls live in the same house and sleep in the same bed.

At the launch, playwright-producer Basil Dawkins, the master of ceremonies, expressed concern about the apparently diminishing role of books in our daily lives. These days, he said, we’re too distracted by the small and big screen. Encouraging parents to read to children for pleasure, he warned against reading becoming solely associated with studying. He mused that in the old days, teachers would read to students in class and often seize books the children were surreptitiously reading. Now, ironically, they can’t get children to read.

His comment on Dancing on the Auction Block, which is about human trafficking, was that he found it terrifying. The realistically drawn situation made him ask, “Is this the Jamaica I’m living in?”

Martin read the first chapter to the audience. It tells of the daylight abduction of a young woman on a Montego Bay street and the intention of her abductors to break her spirit before putting her to work as a go-go dancer and prostitute. Dawkins said that the book was ideally suited to be made into a film and that as a producer he would be interested in a screenplay by Martin.

Joanne Simpson, a publisher and the author of some 10 books, was the keynote speaker. She noted several benefits of reading:

Asking, “What better way to be introduced to love and desire than through the pages of a book?” she said that books can teach us about our emotions without our being embarrassed.

While appealing to financial institutions to provide funds for publishing and to bookshops to support local authors (in displaying local books prominently, for example), she said that local authors would probably find the Jamaican market too small to provide a livelihood. They should also write for foreign readers, she said.