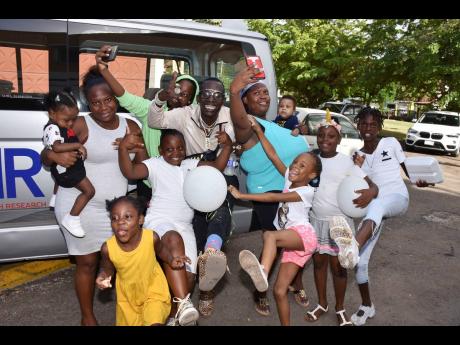 Under the theme ‘The Magic of Christmas’, the Sickle Cell Unit (SCU) feted over 80 children (15 years and under) and 50 adults during its seventh annual Christmas Treat. Held on Thursday, December 19, the treat was a well-thought-out affair and included a generous donation of sweaters and an engrossing performance by local magician Quan. There were also appearances by dancehall-cum-gospel artiste Chozenn and Real Rich, the enigmatic character formally known as Tanto Blacks.

“It was really awesome. It was a joyful day. We went low-key. They didn’t know we were coming. The kids danced and laughed. It was a joy,” Chozenn told The Gleaner.

Treat coordinator Alphanso Blake Jr has been dedicated to making the treat successful for the sake of the patients of the SCU, located at The University of the West Indies, Mona campus. Months in advance, the medical social worker sends letters to various entertainers, asking for a donation of their time. For the past few years, some have responded.

In 2016, Blake secured talents Voicemail and Kevin Downswell as part of the treat’s entertainment package. The following year, gospel artiste Carey Sales was the invitee.

Last year, Glory To God singer Wayne Marshall was the special guest, along with Minister of Health Dr Christopher Tufton. “I write my letters, and I tell them I can offer them a token, but I can’t pay. They do come on board. Sometimes they end up not being able to make it because of other engagements, but I try,” Blake said.

And so Blake tries because he bears witness, on a regular basis, young children coming to the clinic seeking treatment for pains and other ailments, especially during cooler times. While the Christmas season brings joy and cheer to many, the cooler temperature brings aches and pains for sickle-cell patients.

He continued: “I try to ensure that when they come, once in a while, they have something to feel good about.”

This year’s treat included the unit receiving the proceeds of a sweater drive spearheaded by sickle cell patient Orlando Henry. “He knows what it’s like when the season comes around,” Blake added.

Blake’s efforts are not restricted to Christmas. He also organises treats for patients in Black River and Montego Bay during the Easter period.

The SCU gives thanks for sponsorship and donations from family and friends of the unit, including the VMBS Foundation, GraceKennedy, Tastee, National Bakery, LASCO Distributors, Wisynco, Fontana, Mars Entertainment, Kirk Distributors, Circle K UWI, Fudgie’s Wrecker Service, and others.