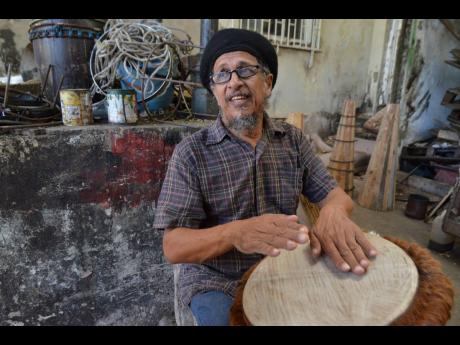 Kenyon Hemans
Phillip Supersad beats one of the drums he created.

Phillip Supersad is not afraid to share his secrets to drum-building. “See, I am already here sharing my methods down to the very measurements with you,” the known drum-maker and ceramist said humorously to The Sunday Gleaner. Super, as he is affectionately called, says it would be gratifying to learn if the art of crafting instruments from a technique he has perfected becomes tradition.

“It is simple geometry. We all learnt about pie chart in school, so a Kete drum is made up of approximately 17 staves, cut at an angle of 10 degrees. The method of making a Djembe involved making three different parts of 20 staves each, but the idea to cut 60 staves for one drum was time-consuming so the method of making a long cone with big, tapered staves was developed,” Super shared.

Stepping through the rusty metal gates to a courtyard that once welcomed eager students to study art and craft into what has been transformed into a workshop off North Street, it becomes apparent that Super moves to a metamorphic beat. With every step closer to the work area, the unbearable smell of goat hide or skin becomes stronger. On a line hangs several pieces that have been dried and are ready for the next phase of production.

“I am actually sorry yuh never come one day when we have skin from a freshly butchered goat on the line. It is not the most pleasant of encounters, and I have had the public health inspector come to check on the operations here a couple of times,” said Super, as he realised the noses turned up at the mere whiff of days-old dried goat skin.

“Except for us using a little bleach water to wash it, nothing is put on the skin then. The underside [of the skin] is exposed to the sun on a line. Sometimes it is put on a board. It coagulates or thickens and shrinks somewhat in the drying process.”

Standing on the grounds where Super began his studies in art, the stories of drumming and drum-making are automatic in his conversation as he leads you through the technique with goat skin and recycled palettes made of pine wood.

There are strips of the wood of different sizes in every corner, metal rings and various tools and contraptions for cutting, stretching, tightening, and tuning the drums. But it’s the types and number of drums sitting in the workshop waiting to be reconstructed and wooden frames waiting to be transformed into one of Super’s polished percussions that become the heartbeat of creating beautiful rhythms. He gets assistance from drummer Reuel Phillips and an apprentice, Steven Johnson, who at the time is busy shaving the hair of the skin that has been stretched on a cylindrical wooden frame.

He noted: “We get drums that just come off the boat, it maybe happened that somebody drops them and they are mashed up in 10 different pieces but we are able to bring them back to a state of glory.”

Even as the piercing sound of something popping under pressure hits our ears, an indication that Phillips has popped a rope during the process of tuning a drum, Super, in his witty spirit, applauded his young protégé.

Super said: “Young people are generally not interested to learn about their instruments. They want to play the drums, but as it is with rehearsals they don’t want to put in the time and work. What I mean to say is, you will find a youngster comes with the drum to repair the skin but is not interested to see how it is done. When it gets to where the drum can be played again, he takes it and leaves. It is nice to see these young men, as a 62-year-old, enjoying each step the way I do.”

Looking at the various Djembe, goblet-shaped, rope-tuned drums, and also the Kete, a sort of elongated bongo drum that has taken a couple days to construct, what stands out is the craftsmanship and the mystery of how they are tuned – it is almost like learning another language.

“It is one thing to say you are a drummer, and a different thing to live the life. It is all well and good for someone to say he is a drummer and can play one or two rhythm but a player must learn all elements that put together to make the drum, they might not make a drum throughout their lifetime but it is valuable knowledge to know how it is made,” he explained.

And to simply describe Super as a drum-maker is a bit of a misnomer. Asked to play the drum, he does not hesitate. Super is often found on stages striking the skin of the instrument in an infectious pattern. He proves that making your own drum is a meaningful process and all the more rewarding to play and see others playing an instrument you crafted from scratch.

“Some people think I only became interested in this after art school, but it is an interesting phenomenon that I became famous for pottery because the focus was on ceramics. However, I was introduced by a friend while attending Knox College in Manchester. At the time, I was satisfied with sitting and watching him play, but while attending art school, drumming was a kind of repast and distraction,” he said.

“I have had to answer the question of which do I prefer, the playing and making of drums or pottery, many times. And it is always, a me do the two of them don’t it, so why separate them? Is the same expression, just two different mediums. I make other instruments such as the banjo and bamboo flute.”

There’s no escaping the coordinated sounds of bass and high-pitched slaps in the courtyard even as work is being completed Super says as he crafts to the beat of drums every single day – his only hope is that “the rhythm will catch more persons and inspire them to learn”.