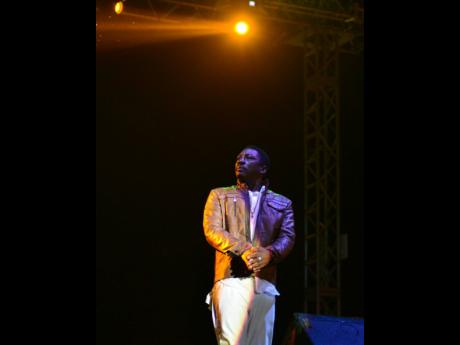 This may sound rather dramatic, but it was an apocalyptic vision that changed the path for reggae singer Pliers and led him to record his very first gospel song.

Pliers’ end time scene was played out about two months ago, and to this day, he is still baffled at just how real the events felt. A catastrophic earthquake, fearfully howling winds, voices beckoning him to heed the call to repent, and him running to safety, all while holding his daughter, comprised this nerve-racking drama.

“In the dream, I was standing outside my house. Everything was calm and easy. I had my little daughter in my hand and was talking to some people. Then breeze start blow worse than a hurricane, there was an earthquake and mi feel like when mi was a lickle boy and my mother seh judgement a come.

“I was trying to run inside my house, but the breeze was blowing the door shut and I hear voices saying, ‘Come on and serve the Lord now’. I looked and didn’t see anyone, so I realised that the voices were in the breeze. The voices start to sing the words and I was there trying to get inside the house and then, thankfully, I wake up and realised that it was a vision,” Pliers recounted.

GOD IS ALIVE AND WELL

One half of the famous musical duo Chakademus and Pliers, he told The Gleaner that the experience was horrible. However, it has got him thinking more about God and the world, and he expressed that “God is alive and well”. As a result, he penned a gospel song, which he delivered live for the first time on Friday.

“Before I got the vision, I was working on an album. I had no thoughts about doing a gospel song, but when I woke from the vision, I immediately wrote down the words and everything that I heard. Is like angels were singing and they were very calm, and it’s as if they were telling me to ‘don’t run, stand up and hear wah mi haffi seh’,” Pliers recalled.

The result is the song, titled Come On And Serve the Lord Now, that will appear on the solo album, which is being produced by Jah Screw, who is described as a Christian-minded man.

Pliers, one of the famous Bonner brothers, that include Richie Spice, Spanner Banner and Snatcha Lion, believes that the song was ordained, and he is now considering doing a full gospel album.

Quizzed about the possibility of him going full time into the arena, he stated that it can definitely happen, as he now attends a Methodist church occasionally with his wife, in addition to which, he was brought up in the church. “If God wants us to do it, yuh not even know, yuh just find yuhself get up and do it. ‘The Earth is the Lord’s and the fullness thereof’,” he said.

Pliers, who still tours as a duo with Chakademus, has enjoyed quite a bit of success in his career. For him, the most notable was having six songs on the British National Chart and debuting on Billboard. Chakademus and Pliers are known for songs such as Murder She Wrote, Bam Bam, Tease Me, Twist and Shout, She Don’t Let Nobody, I Wanna Be Your Man and Gal Wine.