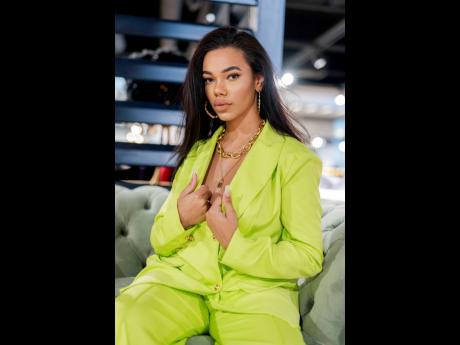 Contributed
UK singer Siobhan plans to take her music from the depths of the sea to the stars above.

An Internet search may not be the fastest medium to find on-the-up entertainer Siobhan (pronounced Sho-van). Even with a unique name like hers, which is of Irish origin, a Google search would first present musicians from Ireland like one of the founding members of the 1980s British girl group Bananarama, known for their hit single Venus. But the xx-year-old is hoping to remedy that as her singing career progresses.

Siobhan was a name chosen by her father, who explains that that is what his daughter wants to see in lights on the big screens as she performs.

“From the beginning, we were sure that we wanted her birth name to remain as her stage name, especially since she had already begun to make noise on social media and her followers already knew her as Siobhan. It wasn’t popular back then, and it has a classy feel to it … fitting the stage personality she has been evolving into from the start,” said Donovan Webley, founder of Webley Records and Siobhan’s ‘dad-ager’.

And the stage is not an unfamiliar environment for the United Kingdom-born singer, neither is the recording studio. Already, music lovers worldwide have witnessed amazing performances by the songbird when she featured on The Voice in 2017 and then X Factor the following year. Though delivering energetic and entertaining performances to a full audience, X Factor was one experience that made her question if being in the music industry was really for her – but she continued her pursuit.

As the daughter of the label owner who hails from the De La Vega community of Spanish Town, she has had the opportunity to meet a diverse mix of musicians as well as to acquire an understanding of the music business, she said. Her mother’s side of the family is also from Jamaica, from the north coast parish of St Ann.

“Growing up with parents of Jamaican heritage, I leaned more towards the culture and way of being. Added to that, I was raised knowing the morals and disciplines of anyone that was actually born there, and other than my parents, I have learnt more about the culture from the Jamaican community here, including producers and musicians, so the connect is always strong,” Siobhan told The Gleaner.

Her first taste of the spotlight was as a competitive dancer – she flourished in the dance entertainment world. She was crowned in under-18 solo championships and later appeared in music videos and as the backing dancer for chart-topping British rapper and actor Lethal Bizzle at the 2015 MTV MOBO Awards. She says she later gained the confidence to reveal that she had a voice and decided to dive headfirst into the music industry. Now she is exploring the depths of reggae with her latest single Songbird.

It was a song the singer did not even know was being recorded. She shared that “it was the most spontaneous piece of work I had worked on, and I am very grateful for how well the public is responding”.

Recorded first a cappella during a bride’s walk down the aisle, Siobhan was surprised to find out that it had been submitted to her father, who then had the beat built around the recording. It is the first reggae single in her catalogue, but her team is already working on recording two well-known covers, again adding her reggae twist. Siobhan also expressed a love for dancehall music and expects to also be creating it in the future.

“I am influenced by the likes of Dennis Brown, Chronixx, Etana, and Koffee, and I’ve adopted my own style, fusing these influences. And though no collaborations have been recorded with any Jamaica artistes, there are dancehall deejays I am hoping to connect with,” she said.

She anticipates making more connections in April, when she arrives in Jamaica to shoot the video for Songbird, and hopes to be embraced by Jamaicans as her roots and musical styles are all inspired by Jamaica and the Caribbean.

“I don’t label myself as a songbird. I am always trying to develop my sound, and it is not my sole purpose to make Jamaica fall in love with me, but to create music that Jamaicans everywhere will be proud of while being able to uplift, relate, and connect to people worldwide. I hope being in Jamaica will help me develop more,” she said.