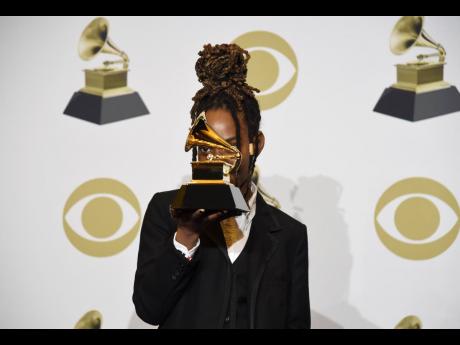 AP
Koffee poses in the press room with the award for Best Reggae Album for ‘Rapture’ at the 62nd annual Grammy Awards at the Staples Center yesterday. 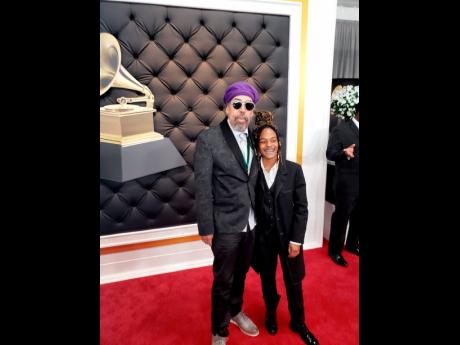 Contributed
Stephen ‘Cat’ Coore and Koffee embrace for a snapshot as they enter the Microsoft Theater for the 62nd Grammy Awards Premiere Ceremony.
1
2

Nineteen-year-old reggae singer Koffee can now boast the title Grammy Award winner after walking away with the trophy for Best Reggae Album for the Rapture EP at the premiere ceremony held at the Microsoft Theater in Los Angeles, California, yesterday.

Her first EP, Rapture, has been making waves since its official release almost one year ago. It debuted at No. 1 on Billboard’s Reggae Album Charts and ranked in the top 10 on iTunes Reggae Chart.

On accepting the award, the Toast crooner first expressed gratitude to the producers of the album. Teflon Zincfence, Lasanna ‘Ace’ Harris, Frankie Music, and Major Lazer’s Walshy Fire were all among the creative minds involved in creating the five-track production.

Impressed by her overall growth and composure, Frankie Campbell of Frankie Music said Koffee has made a lot of firsts but that she has a lot more growing to do.

“She has obviously been in the music business the shortest out of all the nominees over the years, the first female to win for an album and the youngest, and, hopefully, she can, in the next three years, be a force to reckon with in experience and stature,” Campbell told The Gleaner.

“I am hoping she continues to strive for the best because nothing is guaranteed, but we can all agree she has had a great start and that she is talented. But it boils down to more than that. On behalf of the team and Fab 5, congratulations, and we are proud of her,” he continued.

Koffee, in her speech, also dedicated the award to the veterans of reggae, those who were nominated with her and have acted as major influences on her career.

“I pay my respect to Julian Marley, Steel Pulse, and Morgan Heritage for all the input they made in the reggae. I learned from them and a lot of people in the music industry, so this one is for all of us. This one is for reggae. This one is for Jamaica,” Koffee said.

She was nominated among veteran reggae artistes and bands, some of whom are past winners and nominees. Steel Pulse won Best Reggae Album 1986 for Babylon The Bandit, and in 1998, producer duo Sly and Robbie won for the album Friends. It is Julian Marley’s second nomination and Third World’s ninth.

Cat Coore of Third World Band was there to witness the Ragamuffin singer’s win.

“You have to be here to experience it. I am proud of us all, but Koffee is my idea of a role model that our young Jamaican women need, so I am just proud to be here to see it. I was able to have a nice talk with Koffee before she took her award, and I not only congratulate her, but appreciate the fact that she wants to be that example for the youth,” Coore said.