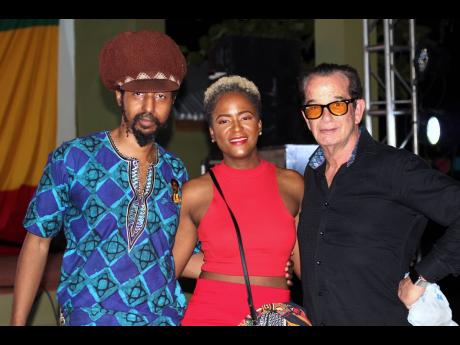 Stephanie Lyew
From left: Kwasi Bansu, founder of the Jamaica Music Conference; Joan Webley, program manager; and Joe Bogdanovich of Downsound Entertainment, one of the partners for the conference, take a break from their tête-à-têtes. 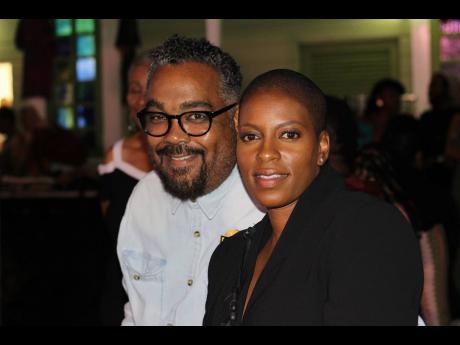 Stephanie Lyew
Partners of the Jamaica Music Conference and life partners Bobby and Syn Clarke get comfortable in the dub garden of Itopia Life for the official opening.
1
2

Exchanging handshakes with entertainment executives inside the dub garden of the iconic Henzell home was part of the organic hustle and bustle of the Jamaica Music Conference (JMC).

“One of the things that the JMC has been good at doing is fostering an environment of trust, honesty and openness; persons come with the mindset that they are coming in to share or contribute, so the most important things we can do is keep that conversation going,” explained the programme manager, Joan Webley, at the official welcome reception last Thursday.

The event was not so much of a reception as it was an opportunity for persons to network.

Webley told The Gleaner: “When people are in a room together, we find a lot more in common than we find to be divided about. The conversations that need to happen are now happening in places now where people never used to talk.”

She says that the music industry, like any other, is one that is not without suspicion and mistrust but that over the years it has been improved with the increase in global interest.

From the idea that the music industry is not a serious marketplace, she added, “That is part of the scepticism and, honestly, individuals may not be able to escape, it but nothing hurts a try. Jamaica has had many successes, contrary to belief. It’s not that there is no business here and the mandate of the JMC is to bring persons like that who can come with models and examples from local contexts, and as well as to bring that international expertise so it’s not second-hand, or a ‘I heard’ or ‘I’m guessing’ situation.”

Getting through to sceptics

But how can one remove the sceptics of the business of music?

“Say no to scepticism,” were Sharon Burke’s exact words.

She added: “Persons in the creative industry need to move forward, leave the traditional way of thinking and come together for a united atmosphere in reggae and dancehall.”

Burke, who is the cut-throat principal of Solid Agency, the most recent partner with the JMC, said it was years of mentorship under the likes of Reggae Sunsplash organisers Ronnie Burke and Tommy Cowan, as well as culture minister and then artiste manager Olivia ‘Babsy’ Grange that helped her to identify sceptics.

“I learnt how to deal with people, and just saying no to scepticism makes my job easier. It helped me to overcome hurdles within the music industry,” Burke told The Gleaner.

The company injected new outlooks on networking for the seventh iteration of the music conference.

Platinum partner Irie Jam Radio was once a sceptic; the power couple Bobby and Syn Clarke revealed they were very sceptical prior to jumping on board, first in a minimal way – the company sponsors an entire event.

“I was very sceptical, no doubt about that; but when you hear the passion an individual has for the business, you have to listen. Most times you can tell if the person is coming with an agenda; the conversation often begins with ‘I want’, and we didn’t get that from JMC. Instead, the discussion started with what are we going to do to help the business and build Brand Jamaica,” Bobby Clarke shared.

Syn Clarke added, “As far as scepticism and how the Irie Jam works or has worked from the day I started with the company, is from a love perspective, a diffusing energy, and once the energy aligns, a person can feel how scepticism may or may not play a place. There is a natural mystic about reggae music, it all lies in the authenticity.”