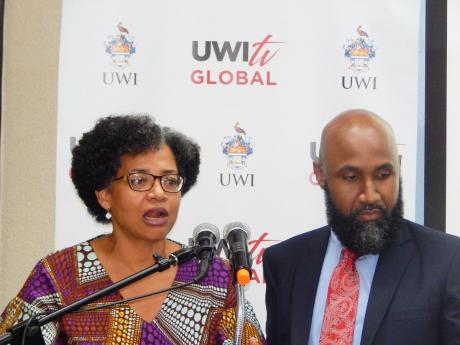 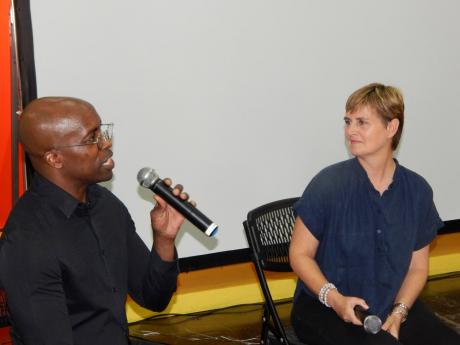 Michael Reckord
Chief curator of the National Gallery, O’Neil Lawrence, speaking to Justine Henzell about ‘The Harder They Come’.
1
2

The past seven days saw two very significant events in Jamaican film occurring. One was the re-screening of an iconic movie; the other was the launch of a book on film.

Had author and film-maker Perry Henzell been alive to celebrate his 84th birthday on Saturday, he would’ve been pleased with the National Gallery’s (NG) perhaps inadvertent tribute to him. This was the screening of a documentary on the making of The Harder They Come, an internationally acclaimed, award-winning movie which Henzell co-wrote with Trevor Rhone and directed.

The documentary, made by Chris Browne – of Third World Cop (1999) and Ghett’a Life (2011) fame – marked the beginning of a first Saturday series of films that the gallery will be showing until June. It is a part of the public programming associated with the NG’s current exhibition ‘Jamaica Jamaica’, which was specifically created to show how reggae “conquered the world”.

Reggae is also of great importance to the movie, which did much to promote the music’s popularity in its early days, and, in fact, got the Best Sound Track prize at the Venice Film Festival. Not surprisingly, the movie is referenced in the NG exhibition.

What is surprising is how often numerous unplanned components of the movie turned out well. This was revealed in the interviews Browne is shown having with various participants – performers, investors, technical persons, administrative assistants, and more.

Henzell is shown as amazingly persistent and resourceful in not only making, but distributing the film. In six years, he travelled to 43 countries to sell the movie. Many people associated with it were prepared to wait till things got better or were able to improvise when things went awry. For example, Beverley Manley (now Duncan) became a character in the movie because the actress wasn’t at work that day.

On screen, Franklyn ‘Chappie’ St Juste, the cinematographer, spoke of being injured while filming a chase scene involving José (Carl Bradshaw) and Ivan (Jimmy Cliff) shooting at each other. There was only one gun – Bradshaw’s personal starting pistol – which had to be tossed from one to the other.

On one toss, it cut St Juste quite badly in the face. He washed off the blood, he said, and continued filming.

Henzell’s daughter, Justine, was present at Saturday’s screening and, on questioning by the NG’s chief curator, O’Neil Lawrence, and the audience, provided much useful information about the past and future of the movie. She spoke of the invaluable help given by her mother, Sally, the show’s designer, seamstress and set maker, and revealed that the screenplay now available bears little resemblance to the original, which was replaced by a script written from the finished movie.

The Harder they Come, she said, was the first in a trilogy that her father had envisaged. However, the loss of the footage of the second in the series, No Place Like Home, for more than 25 years broke his heart and he gave up on film-making.

She disclosed that “a reimagining” of the film was being worked on, and that investors have been showing a lot of interest in the project. She added that plans were being made for a June 2022 a celebration of the film’s 50th anniversary.

A collector’s edition of the movie, which contains the Chris Browne documentary, is now available.

Praises kept flowing at Tuesday night’s launch of Show Us as We Are: Place, Nation and Identity in Jamaican Film by Dr Rachel Moseley-Wood, head of the Department of Literatures in English, UWI, Mona. The handsome, 254-page book, which the author says gives a “close reading” of 11 Jamaican films, is published by the University of the West Indies Press.

“It’s a must-read for students and scholars,” said Prof Waibinte Wariboke, dean of the Faculty of Humanities and Education. Prof Ian Boxill, deputy principal of the Mona campus and the director of the university’s Community Film Project in August Town, called the book “path-breaking” in its analysis of major Jamaican movies.

In an insightful review shown via video, Dr Jean Antoine-Dunne, former senior lecturer, noted that movies play a big part in the world’s perception of Jamaica, but the question of what exactly is a Jamaican film is complex. She said that Moseley-Wood’s book is “essential reading for those who wish to challenge the status quo”.

Responding to the review, Moseley-Wood said that she wrote the book for both academics and the casual reader.