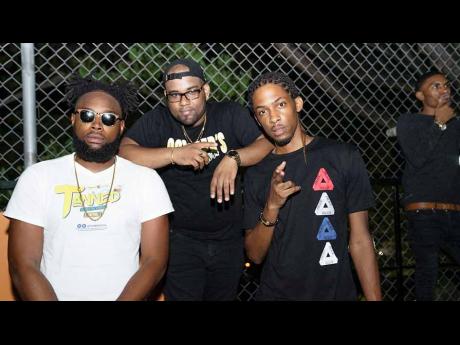 Contributed
The Chromatic crew (from left) Brush1 Chromatic, HeavyD Chromatic, and Ariez Chromatic chill out backstage after an amazing set.

As the local community spread of the new coronavirus COVID-19 begins, businesses are already feeling the negative economic effects. Entertainment events across the island have their permissions revoked, and so all selectors and DJs’ income streams have dried up for the foreseeable future. While some are hopeful, banking on savings or secondary streams that will hopefully support them for the duration of the spread, there are others concerned – because entertainment is their full-time job.

“It’s like a regular man get laid off of his job with no pay. It’s the same for us. The industry is basically dead right now,” Brush1 of Chromatic Sound told The Sunday Gleaner. The self-proclaimed ‘Road Marshal’ made light of the crisis with a tweet which reads, “Call centres hiring? Asking for myself?” Jokes aside, the selector recognises the potential economic and professional trauma expected to befall his colleagues.

“If you’re doing it as a full-time job, you ah guh lose a lot of money. If this is what is paying your bills and putting food on your table, you’re going to take a major hit. Your savings, or whatever you have is gonna take a hit in the months to come. Everything ah get pushed back to months down the line and they’re not earning but still having all these responsibilities,” he said.

According to Richie Supreme of Dynamix Entertainment and Production, there isn’t a single selector or DJ in Jamaica who is currently unconcerned about their livelihood over the next few months. When speaking with The Gleaner, Richie was subdued, pensive about how long the entertainment industry practitioners will have to function on fumes. DJ Richie RAS, a popular selection in the carnival circuit, is similarly concerned. Like Brush1, his consternation stems for those who have taken on the industry full-time.

“I’m worried, but probably not for the stuff weh me ah joke bout. I’m joking about the money, but we’re in a business where you have to be seen, you have to be out there to keep your relevance going. We now have to find creative ways to keep in touch with our audience, and keep our following engaged. It’s much more than just the money, it’s everything combined. It’s a very stressful time,” he said.

Nonetheless, the Chromatic team is at the drawing board, trying to come up with plans to stay relevant, as the island’s entertainment goes quiet. He added: “It’s a sink or swim time. Me and the team ah work. We ah try put things in place, but this is something out of a movie. All the plans that we have for any emergency, a lot of them can’t apply to this.”