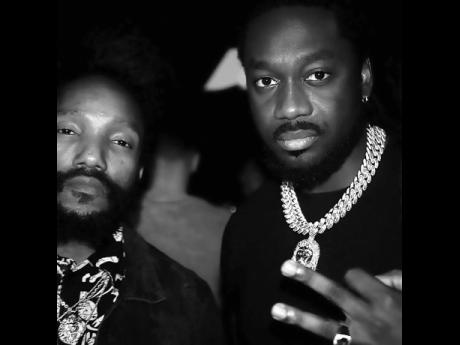 The reggae and hip-hop genres are musically inextricable, with one birthed from elements of another. Putting that fact on full display are Jamaican rapper Third World Don, also known as Mike Beatz, and reggae star Kabaka Pyramid. This Friday, the lyrical pair will release Prayer, hopefully the first of many collaborations to come.

“This was the first record we did. It came out really amazing,” Third World Don, whose real name is Michael Barnett, told The Gleaner.

Barnett was a fan of Kabaka before becoming a friend, then working colleague. “I’ve been following his progression over the last few years. I reached out to him, and we actually ended up building a solid friendship,” Barnett shared.

The friendship was founded through mutual interest in rap and hip-hop music. In fact, before becoming the notable reggae personality he is, Kabaka initially tried to get into the hip-hop game. As a result, Barnett discovered that they had much in common in terms of their influences and style. They also just like a lot of the same music.

“I’ve been a fan of his for a while now, because I feel like he’s a bridge between hip-hop lyricism and reggae and dancehall. We’ve been working on a few records. There might be a few more in the pipeline,” Barnett revealed. But first, listeners can tune in to the hip-hop heads’ latest track called Prayer.

In the midst of a panicked global reaction to the new COVID-19 virus, Prayer is scheduled for release on all digital platforms on Friday, March 20. By virtue of the Internet, Barnett expects people staying at home may have more to spare to discover new music. “The world is connected globally now through the Internet. Everybody is on their computers and their phones.”

Barnett doesn’t think staying in for a while is at all detrimental to his plans. Based in the United States, he was intrigued by the lack of entertainment action back home, with the thought that such quietude, though caused by a potentially lethal viral pandemic, was a welcome change. “It’s not such a bad idea, people staying in their house for a while and just calming down. I know, especially in Jamaica, there’s probably less crime, less things going on,” he said.

As Barnett contends with dystopic scenes of empty supermarket shelves, he is still optimistic that his music will persist. “I just wanna continue to put out music consistently. I definitely have an album in the works, a lot of big collaborations along the way as well. I’ve seen a lot of growth over the last few years. 2020 is a year to look out for Third World Don, for sure.”

Last year was notable too. Barnett wrapped 2019 with 6.4 million streams in 79 countries on Spotify. To date, his 2019 single, called Blessed, is almost at the two-million mark on the same platform.