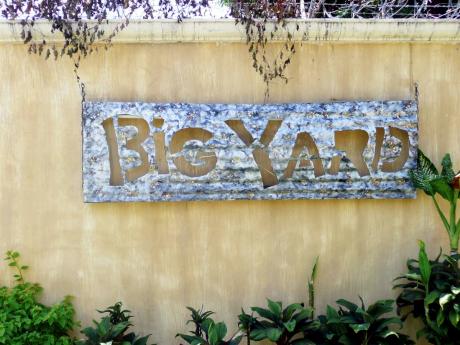 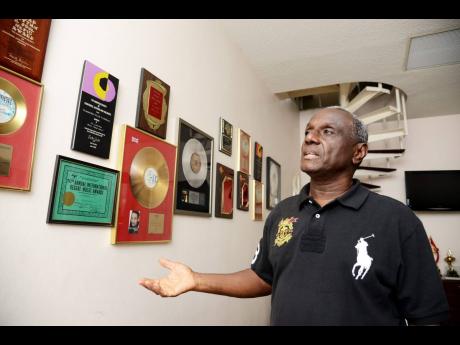 File
Gussie Clarke shows a wall at his studio with some of the hit records he produced and some of the awards he received. 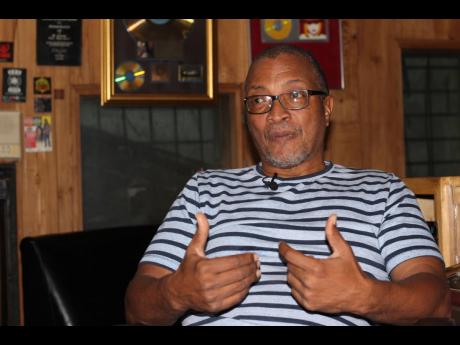 Stephanie Lyew
Producer Mikie Bennett sits inside Grafton Studios in a recent interview with The Gleaner.
1
2
3

“SCIKRON ENTERTAINMENT Big Yard Studios, how may I help you?” says the man who answers the phone at one of the busiest recording spaces in Kingston. On making a query if the studio was taking any bookings at this time, he quickly informed that “coronavirus lock we down”.

According to the CEO Robert Livingston, an artiste manager and producer, business at the studio showed signs of slowing down from last week.

He told The Gleaner, “The studio is one of those where a lot of international guests, recording artistes and musicians come to do rehearsal, record and interact, but in light of all that’s happening we made an effort to be selective who we rent to – not wanting to put any of our guests at risk – until it was decided that we close the doors.”

The man who answered the telephone, Livingston said, is the security guard. After all, even in its closure, the newly refurbished Big Yard Studios still needs to be secure.

Adding to that, the studio owner shared, “There remains a constant flow of requests coming in to use the space, and it had me wondering if people are taking it serious.”

Christopher Martin and Busy Signal are frequent users of Big Yard Studios; while influential UK radio host, disc jockey and producer Seani B has hosted BBC 1Xtra live sessions there with entertainers such as Jada Kingdom and Chronic Law over the past year, and most recently Skillibeng, among other dancehall deejays.

Last year, Livingston revealed that he almost went bankrupt five times, but even with the threat of losing large sums of money with the studio doors being closed, he is not worried.

“I left Jamaica three weeks ago (right before the news hit that there was a confirmed case on the island), but I must say I was getting prepared for it [by] following the world news reports. Anytime a virus like this occurs in a country – like in China [where] a lot of people move around for business; we have a lot of tourists, too – where people move back and forth, a spread is expected,” he said.

“Of course we’re going to lose. A lot of people would want to operate in this time, but it’s not going to be business as usual. It is only going to get worse until we have it under full control, and it won’t if people do not recognise what is happening.”

Effective as of last Friday, March 20, Tuff Gong International, located at 220 Marcus Garvey Drive, is also closed until further notice. However, in a press release, it was explained that “Tuff Gong Studios will be open for private bookings for recording sessions. We implore all persons booking to ensure to observe all the guidelines shared by our Ministry of Health to protect yourself and others around you. The studios will have everything required to ensure a sanitised space for each session.”

Taraje Johnson, daughter of the legendary producer Harry J, told The Gleaner, “Our doors have not closed, in essence, because we are currently focused on personal productions. If anyone comes in, they have to sanitise, and we spray down equipment with the necessary cleaners, like Lysol.”

She notes that bookings called in are from specific clients.

“The environment is always controlled and when our clients book, it is private, so we don’t even have outsiders at or around the studio during a time that is booked. So in that retrospect we are still taking bookings,” Johnson said.

“However, our monthly live series Set List has been halted until the coronavirus pandemic is under control.”

Roy Francis of Mixing Lab said he accommodates one-man recording, but that “the big sessions with the crowd don’t happen and furthermore, those live recordings with big bands, we have to put on pause right now. I can’t stop the work, it can’t shut down completely, but we have to be very careful.”

Anchor Studios is still operating “with a skeleton staff and for private, controlled sessions”, said owner and operator Gussie Clarke.

Mikie Bennett, producer and owner of Grafton Recording Studios, said he has officially closed the premises.

“Everybody, if they can, should just take a break, use the time to reflect, because as Bloomberg said recently, the world will never be the same again, and it is going to force us to change our habits – shopping, eating, spending and so on. It is a lot to process, but we here have to do what we can so that we don’t reach to the level of suffering happening in other countries,” said Bennett.