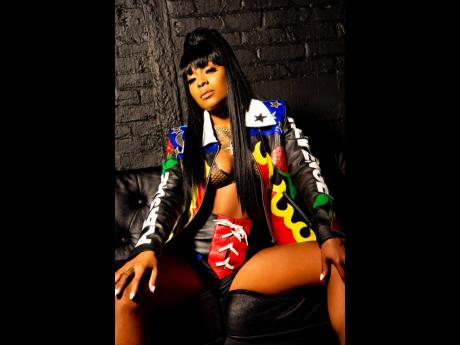 BRONX-RAISED SINGJAY, HOOD Celebrityy, has made a statement that she wants to ‘run di road’ with her new release sporting that title. The Walking Trophy entertainer said she was always confident her recording career was going to take off, “because I feel when you don’t give up you can never lose, and when you stay consistent you always win”.

With New York is now under lockdown, following an official statement from Governor Andrew Cuomo, advising of the “unprecedented action aimed at curbing the fast-spreading coronavirus, as the number of cases in New York surged above 8,500”, Hood Celebrityy, decided to release her latest track.

“I’m not sceptical about releasing any new track during this global pandemic, because I know God is in control and my faith is in Him. But I do worry about what type of music to put out during this time when the world is so negative. I feel my new track is perfect and could turn up the temperature. The energy I wanted to bring across is fun, joy and peace,” Hood Celebrityy told The Gleaner.

So, on Friday night when all the social butterflies would have been flying around the Internet, Hood Celebrityy dropped Run Di Road. She flows over the popular Bam Bam ‘riddim’, which has had enduring influence around music production circles since the 1965 hit of the same name by Toots and the Maytals, and then Chaka Demus and Pliers’ Murder She Wrote.

She said: “It was very easy for me to find and decide what old-school sound and rhythm I would use, because that’s one of my favourite songs [ Murder She Wrote]. What made it so appealing to me is the way it makes me feel. It has a happy dancing vibe, regardless of the mood you in. When that beat drops you forget everything.”

The entertainer said capturing her Jamaican roots is at the centre of her creativity at all times, and Run Di Road will definitely traverse wide musical highways. In like manner, the accompanying visuals which matches the upbeat mood of dancehall street sessions, topped off with her signature hood-glam style, keeps you clicking replay.

Reggae and dancehall is where it all started for Hood Celebrityy and it is evident in her music from her first mixtapes, Can’t Believe It’s Just a Girl and Trap vs Reggae, to even the latest track, that she will never forget where she came from, but she has added her own flavour with her mainstream versatility.

“I really want to surprise the world with the music that is to come, and my album is dropping real soon,” she shared.