Eddie Parkins of duo Alton and Eddie has died 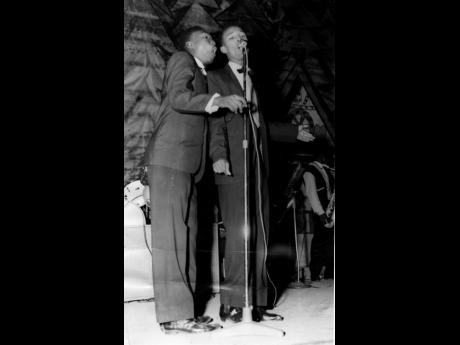 File
Alton Ellis (left) and Eddie Parkins of Alton and Eddie, the duo responsible for the hit ‘Muriel’.

Eddie Parkins, one half of the duo Alton (Ellis) and Eddie, who, in 1960, recorded what would become a monster hit, ‘ Muriel’, passed away in New York last week Thursday, his lifelong friend Eric Collins confirmed to The Gleaner. Collins said that the singer, who was a resident of the Caton Park Nursing Home in Brooklyn, developed a high fever and was rushed to the Downstate Hospital, where he died.

“He was showing all the signs of coronavirus and they suspect that was the case, but they will have to do the necessary tests before the body is released,” Collins informed. “Unfortunately, Eddie couldn’t tell them if he was in pain or anything like that.”

Collins last saw his friend in August 2019, when he visited him at the nursing home, and he recalled that it was a good visit. “He recognised me,” he said. “Eddie’s wife died two years ago and he had been living with family, but then he started to leave the house and nobody would know where he was, and that was quite traumatic. So the decision had to be made to put him in a nursing home,” Collins explained.

Parkins, who celebrated his 75th birthday last month, was more like family to Collins, as they both grew up together in Trench Town and enjoyed a bond that lasted a lifetime. Quite proud of his friend’s successes, he shared with The Gleaner that Parkins, who used to work as a fireman at the then Palisadoes International Airport in Kingston, won the Colgate Palmolive talent contest in 1964 and went to New York, where he appeared on the renowned Ed Sullivan Show.

“That was after his success with Muriel which he and Alton recorded for Coxsone, and they did several other songs as a duo after that. But when this opportunity came, Alton encouraged Eddie to enter the competition, because he said Eddie had relatives in the US who he could stay with if he won. Eddie eventually returned to Jamaica, but by that time Alton had formed a group called the Flames,” recalled Collins, whose own career path led him to the US in 1963 on an athletic scholarship.

Muriel was a ballad which became a big hit in Jamaica and in the United Kingdom, and is said to be one of the biggest R&B songs ever recorded in Jamaica. Alton Ellis is quoted as saying, “When I went to England 10 years later, on a tour with the Soul Vendors band, Muriel was still a big hit there.” The duo also found success with songs such as My Heaven, Lullabye Angel, I Know It All, I’m Never Gonna Cry and Yours.

After a stint at the airport, Parkins joined his wife in New York, where he continued singing, this time as a solo artiste. “He did a few albums and was also the lead singer for a big band, which was the most in-demand band in New York at the time. Willie Lindo and Lester Sterling were also a part of that band,” Collins said.

Among the albums he released were Good Good Loving and Music Food of Love.