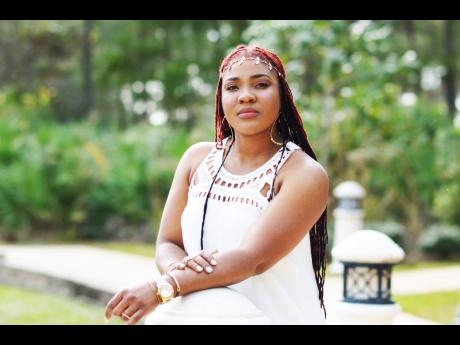 REGGAE ARTISTE Isha Blender is still coming to terms with the loss of her son, Josiah, on January 5, a mere two days after she celebrated her birthday. The daughter of legendary crooner Everton Blender said the death of a child can be one of the most traumatic experiences a woman can face – and many grieve in silence.

“He was approximately seven months old. My son was born on June 20, prematurely, and I was told he had three holes in his heart. He was unable to breathe on his own,” Isha explained in her interview with The Gleaner.

She added: “I was not allowed to take Josiah home, (so) at one point I was living in the hospital. I did my research, but the information provided by the doctors and hospital to this day, does not make sense. Nothing adds up, and I am still trying to accept his death.”

The reggae singer did not believe she could find it in herself to pen the tragic tale, but knew that she wanted to as she has, for years, been writing true-to-life lyrical content about many issues affecting women. Her innate ability to express the pain through songs became a form of therapy and in 2018, Isha released I Rise, produced by award-winning producer Christopher Birch, which she wanted to be an anthem of empowerment for women who have been in abusive relationships.

Isha has had her fair share of burdens to bear, having dealt with domestic abuse and, subsequently, a divorce from her husband. But with the added blow of losing her child, the singer expressed that “I lost myself and ultimately lost my voice”.

She said: “I was going through a rough separation during I Rise. Divorce is such a long process, and it hurt even more because I have known this person from I was six years old. It took me a while to accept that all these things were part of my fate, but I am still here, stronger than before; and though it hurts, I wanted now to harness some of that pain to help others and highlight the reality of this issue.”

Born prematurely herself, Isha has written and recorded I Wish, a song that speaks of the maternal connection she had with her son, and describes the traumatic impact losing him has wreaked upon her life.

“Can a mother’s tender care cease towards the child she bears?” Those are the opening lyrics of I Wish, recorded on the Real Love riddim by Cornelius Daley of Cornelius Records.

She answered: “No. I am still going through it, I am not totally there yet, because I am not a talker and the slightest things remind me of him, as simple as watching something on the television and I will start to cry.”

An emotional Isha opened up to The Gleaner. “Apart from music, which is the way I know to tell my story and ease my mind, my family has helped me a great deal to express my feelings. Even when my father says, ‘God knows best, it’s going to be all right’, I am still trying to accept that is so. I constantly want answers, and there are still days I just wish my son was here.”

The singer cries when sharing the painful task of having to explain to her eight-year-old daughter the reasons he [Josiah] did not come home.

“That’s the part that hurts more than anything else. Deneve knows he died, but then she will ask questions that I don’t know how to answer. It is her only sibling and she was expecting him to come home, so she will cry. I try not to make her hear the song because as soon as she hears it, she cries.”

Isha says she is not only thinking from the perspective of a mother dealing with the loss of a child, but also fathers and children, and is optimistic the song will be a beacon of hope for persons who have experienced similar tragedies.

“The message I’d like to send is not only to mothers, but fathers as well. Maybe women are more vocal with it, but there are many who grieve in private. I want to say, hold on. Whatever it is, as time transcends, everything is a season, what’s going on is not permanent, life goes on. Also, don’t grieve alone. Already, I’ve had persons reach out to me who never told anyone of their loss and pain before.”

The Jamaican songstress, who is from a family of artistes, says she anticipates the end of the current COVID-19 pandemic allowing her to launch a promotional tour in support of I Wish and an upcoming EP. Presently based in Florida, Isha also plans to lend her reassuring voice of experience through collaborations with charities and social enterprises to raise awareness about issues of abuse, domestic violence and motherhood to other women.

“I want this to be more than a song in my catalogue of music. I want to create a forum for women, sisters, fathers and brothers, and children, too, as realising that my daughter is hurting, I see that they, too, go through a painful journey in situations like these,” she said.