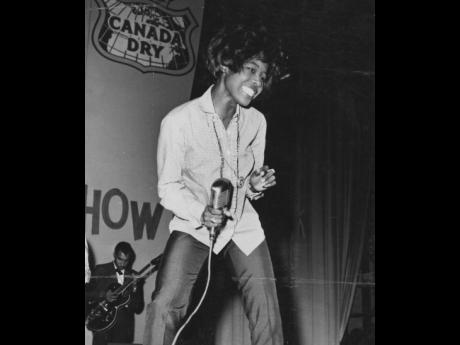 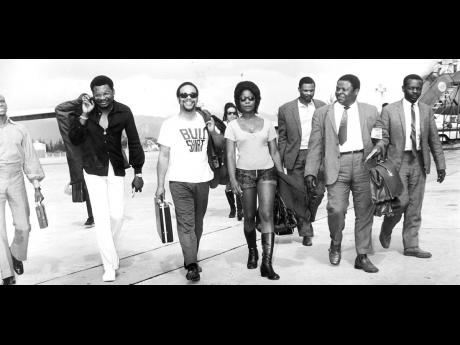 File
England-based Jamaican artistes at the Palisadoes airport on Wednesday, April 10, 1971, on their arrival for the Easter Monday Extravaganza Show at the National Arena. From left are: Jackie Edwards, Count Prince Miller, Charles Hyatt,and Millie Small. Second from right is Clement White, promoter. 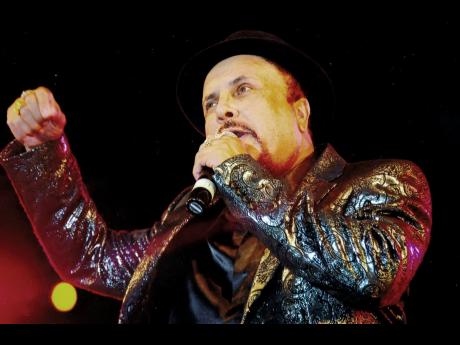 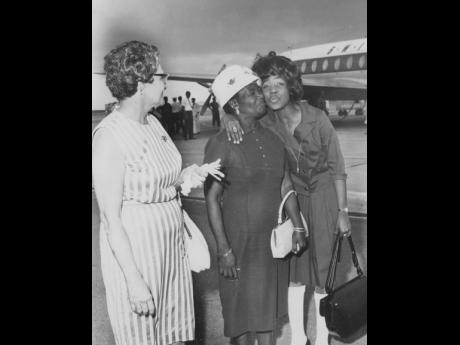 File
Millie Small (right) hugs her mother affectionately after her arrival on the island on Wednesday, July 29, 1964. They are accompanied by Mrs Ivan Vaz, outgoing president of the Woman’s Club, who was among the welcoming party. 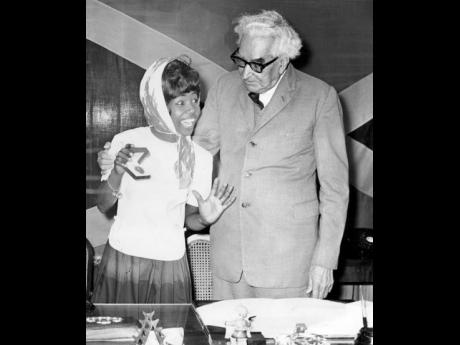 In 1964, Millie Small made one of only two or three trips back to her homeland, Jamaica, and it is an occasion that is engraved in singer Dennis Alcapone’s heart. He was fortunate enough to have actually seen the sensational My Boy Lollipop singer in person, and the teenager made a lasting impact. “She had on black leather trousers with white boots, and she was just gorgeous. When I saw her, I fell in love,” Alcapone shared with The Gleaner. “I am looking at her now,” he added.

Alcapone, who went on to become a prolific singer, recording over 100 singles and three albums between 1970 to 1973, was recalling Millie Small’s visit to the island after making humongous strides on the international scene, where she became a ska superstar and set the pace for other Jamaican acts to follow. The Island Records teenage artiste, who had wowed the world, had come home to celebrate the country’s second independence anniversary celebration in August 1964, and Jamaica was only too eager to spread out the red carpet. Millie was escorted by police motorcycles to greet then Prime Minister Sir Alexander Bustamante and the governor general of Jamaica and was driven through the streets of Kingston, where many lined up to see her. She was fêted with ceremonies befitting royal visitors, according to reports on the National Library of Jamaica website. Thousands turned out at the National Stadium in Kingston to see Millie and also at the then Sheraton Hotel to see her perform. It was the era when cinemas were the venue of choice for live events, and Millie performed at the Capri Theatre in May Pen, Clarendon, the parish of her birth.

Interestingly, over half a century later, in February 2020, another Jamaican teenage singer, who was the toast when she returned to the island after making history by being the first female to win the Grammy award in the Reggae category, got a taste of this treatment. Koffee was met at the airport by Minister of Culture, Gender, Entertainment and Sport Olivia ‘Babsy’ Grange. Prime Minister Andrew Holness hosted a special reception for her at Jamaica House, and, beaming with pride, stated that “having someone as youthful and creative as her with such powerful melodies that are appealing to everyone is impeccable for our music and culture”.

However, while Millie Small and Koffee share many similarities, Koffee, with her laid-back, almost androgynous look, has shown that being labelled a sex symbol definitely isn’t her cup of tea. But her style works for her, and who knows, perhaps in another 50 years, history may record it differently.

Owen Gray, a pioneering Jamaican singer who coached Millie Small before she became an international star, was quick to agree with his friend Alcapone that the girl who he (Gray) did a duet with a few years earlier, was a sex symbol in her time. “Millie was slick. Her hairstyle was up. Everything about her was what a young Jamaican man would lust after,” Gray stated. “She was really a very sweet girl, and we will miss her,” Gray and Alcapone, who both reside in England, said of their late friend.

The National Library reports that the highlight of Millie Small’s success and popularity occurred when she returned to the United States for the New York World’s Fair that same year, 1964. The organisers had designated August 12 as Millie Small Day at the fair. She was the centre of attraction, and music critics hailed Millie Small as the greatest singing sensation since the Beatles. And 47 years after her splash, red-carpet homecoming, the Jamaican Government showed that they had not forgotten the reclusive Millie Small, who had hung up her microphone decades earlier. On August 6, 2011, the governor general conferred the Order of Distinction in the rank of Commander (CD) upon Millicent Small for her contribution to the development of the Jamaican music industry. She was not present to accept the honour, however, former Prime Minister Edward Seaga, did so on her behalf.

Millie Small passed away last week in England at the age of 73, leaving one daughter.