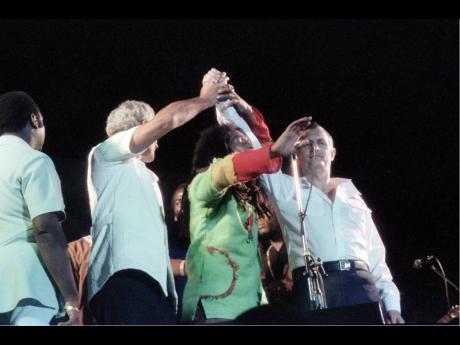 File
Bob Marley (centre) joins the hands of then Prime Minister Michael Manley (left) and Opposition Leader Edward Seaga at the One Love Peace Concert at the National Stadium In Kingston on April 22, 1978. 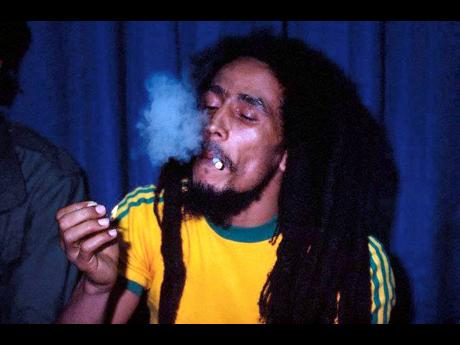 File
Bob Marley backstage in New York, September 1980, where he performed with The Wailers as support to The Commodores. Two days after this concert, Bob Marley collapsed in Central Park, and was diagnosed with cancer. He died a few months later on May 11, 1981.
1
2

Monday, May 11, marks 39 years since Robert Nesta Marley OM, died at the University of Miami Hospital in Florida. I was a youngster living on Sunflower Way in Mona Heights, Kingston, on December 3, 1976, when the reggae legend was shot at 56 Hope Road (the site of the Bob Marley Museum today) by unknown assailants. As news broke of the assassination attempt, a collective “mi caan believe it!” reverberated across Jamaica. To put it mildly, we were all in shock. Marley’s wife, Rita, and manager Don Taylor were seriously injured while a bullet grazed Marley’s chest and another lodged in his arm.

Marley was slated to perform at the free Smile Jamaica concert at National Heroes Park in Kingston two days after he was shot. A flyer advertising the event said, “Bob Marley, in association with the Cultural Section, Prime Minister’s (Michael Manley) office, presents Smile Jamaica, a public concert featuring Bob Marley and the Wailers and I Three. The concert was arranged to ease political tensions and gang warfare that had engulfed the country in the months leading up to the December 15, 1976, General Election.

Marley’s popularity was looming large in Europe and parts of the USA. He was revered by many and seen as a symbol of freedom. The attack, some say, was to send a strong message that he should not meddle in politics.

“I do not defend Marxism nor capitalism. We are strictly Rasta,” Marley once proclaimed in a ­television interview.

The answer to the ‘who shot Marley?’ question I found in a Marley documentary on Netflix titled Who Shot The Sheriff? that I recently stumbled upon. When Marley was once asked by TV host Gil Nobel if he knew his attacker(s), the reggae legend said, “At that time, no.” He later confessed that he knew who did it, however, admitting that no one was charged. The question that still lingers is whether Marley was attacked by assailants aligned to the political parties or was it the work of the CIA? While not naming the person who pulled the trigger, the documentary – directed by Kief Davidson (writers: Jeff Zimbalist & Michael Zimbalist) – interestingly places infamous Jamaican drug lord Jim Brown, father of Christopher ‘Dudus’ Coke, at the scene of the crime.

Reggae historian and musicologist Copeland Forbes, who will soon release his autobiography Reggae My Life, narrowly missed being there.

“That particular night, I was down by the Sheraton Hotel with Don Taylor (Marley’s manager),” he shared. The two were having discussions about a January 1977 concert at Madison Square Garden in New York with Burning Spear, Mighty Diamonds, and special guest Black Eagle, featuring Denroy Morgan (patriarch of reggae group Morgan Heritage).

After the meeting, Taylor asked Forbes to accompany him to 56 Hope Road, where Marley and the Wailers were rehearsing. He refused, opting to visit his mother, whom he had not seen since returning from abroad.

“When I was there (at his mother’s), I heard it on the news ... . I jumped into a taxi and went up there (56 Hope Rd). The place was cordoned off. Police were there. Bob had already gone to the hospital,” he disclosed.

“The thing that I learnt from watching the documentary that I did not know is the part about Jim Brown,” he told The Gleaner.

The 45-minute documentary is engaging and gives a bird’s eye view of the social unrest that plagued Jamaica in the 1970s. This was at the height of the Cold War between the USA and Russia. Unconfirmed reports are that the US government was tracking many pop musicians at the time, including Marley. The CIA was particularly concerned about the relationship between then Prime Minster Michael Manley and his socialist agenda and Cuban leader Fidel Castro. Some feared that Jamaica could follow Cuba into communism. The documentary comes to life with some never-before-seen archival news footage. Among the notables who were interviewed for the film were former Prime Minister Edward Seaga; former Information and Youth & Community Development Minister, Arnold Bertram; reggae artiste Jimmy Cliff; Tommy Cowan; Vivien Goldman; Diane Jobson; Wayne Jobson; Marley historian, Roger Steffens; Allan ‘Skill’ Cole; and Alvin ‘Seeco’ Patterson, among others.

After the assassination attempt, Marley flew to Nassau, Bahamas, then to England, where he recorded albums Exodus (1977) and Kaya (1978). Two years later, he returned to Jamaica for the famous One Love Peace concert, where Marley, Peter Tosh, Dennis Brown, Althea and Donna, Beres Hammond, U-Roy and Jacob ‘Killer’ Miller performed.