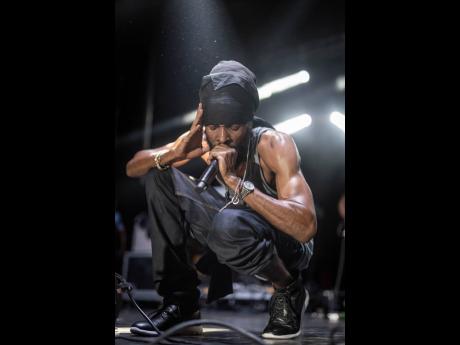 Spragga Benz is doing well these days on The Journey Chosen, which is the title of his ninth album which will be released next week. It has been exactly one year since the Franklin Town-born megastar set an almost stratospherically high bar for veteran artistes looking for an entrance into the fast-paced decade of dancehall music, with the Chiliagon which debuted at No. 1 on the Billboard Reggae Album charts. The internationally renowned dancehall artiste waited 10 years to release that compilation, but says he’s, “not wasting any time, not on the next one either,”. Understandably it only took so long because some of that time was for personal healing.

“Time waits on no man; so, I’m putting in the work for another project as we speak. My generation of musicians, as well as the fans, we nah really get so much of that. The ‘90s gone from the ‘90s, but we can recapture aspects of the atmosphere, be it through the writing, the topics, delivery and style, tempo of the beats, and still maintain /ill that gap for my era,” Spragga Benz told The Sunday Gleaner.

The dancehall artiste emerges with one of his most powerful albums yet, an endless expression of gratitude and complex meditation on the goings-on of the world. Spragga Benz, born Carlton Errington Grant, also opened up about coping with loss, not only the loss of his son Carlton ‘Carlyle’ Grant Jr who suffered an untimely death in 2008, but also losing touch with the world.

He isn’t trapped in sorrow or consumed by it. As a father of 10 children, he has discovered solace after despair, he shared, “Family is the essence of the production, from working with Lamar [Reynolds] who we were connected to through my son, not in no big studio, most of the work was at his home. So from there it had a whole family feel to it. They are influential in the lyrics in some way, shape or form.”

Lamar Reynolds, producer and owner of LMR Pro, expressed wanting to put out a tribute rhythm for his friend. It took them approximately one year and six months to complete the memorial track titled Never Leave, but other ideas were born which matured into the 11-track album fusing talents of the likes of Ky-Mani Marley and Wayne Wonder, longtime friends of Spragga Benz.

Minus the tear-jerking Never Leave, which intros with the sounds of Carlyle speaking and laughing and also features popular musician and producer Salaam Remi playing bass guitar, the album has a song, a style and emotions that represent for a wide scope of music lovers, but to its core targets the foundation reggae and dancehall fans.

“The process of creating this album was natural. While working on Never Leave, I got to hear other rhythms. So it was like, let me hear this and that, until we start create ideas together which turn into nine tracks from him and two tracks from Red Square Productions. The increase in tempo of the music nowadays, like life, is natural. People want to move with the new age but I nah leave out the roots, I am trying to introduce them to consistency,” he said.

“LMR Pro understood that and I am proud of him, the work he is doing as a young producer and his approach to the business.”

Speaking of the current state of the entertainment business, which for the most part is dependent on the virtual marketplace, Spragga Benz had this to say. “We just trying to adjust to the new changes, be more independent. Still there are restrictions but we must start look into what an artiste doing for themselves without a big label behind them. It weighs totally on the digital platform.”

Spragga Benz’s exploration of the film industry, first with his 1999 debut in Brooklyn Babylon, where he played himself ,then again in the 2002-Jamerican crime movie Shottas, connected him to a whole other side of entertainment and propelled his career. He said, “I learned that acting is an extended music video which you do it one time this way, then do it again from another angle and then another angle.” He hasn’t played any roles recently, but says he’s received scripts and is just waiting on one to strike that feeling to make him want to be part of the production.

As for the music, he admitted it to being more challenging to connect with the audience from a virtual space.

“We just can’t connect [with the people], they’re not there. While I can stand on my own foot, with a live audience it’s much better because of the energy we feed off each other. Some songs don’t come across with the right emotion on a TV or phone screen. Me and the band was just having this conversation. So who knows? We might do a live stream, invite all the artistes and perform the album.”

Hinting a possible Grammy submission, Spragga Benz said, “Why not? I want the people them to know I am thankful for their continuing support and I am consistently trying to satisfy them. It all comes down to the committee … it’s out in the atmosphere.”