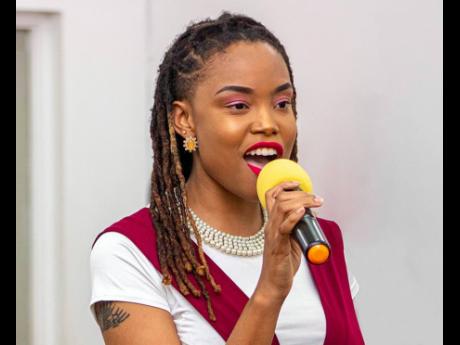 A quiet breakout singer from St Ann, Timuna, has her eyes set on being the next flower to blossom from the Garden Parish. While her appreciation of Afrocentric style makes her a fit in today’s reggae landscape, it’s her ‘switch-it-up’ prowess in her I Love Life debut single that has Timuna growing on the doorsteps of greatness.

Locally, the young star looks up to Richie Spice, placing him on a pedestal from a young age. And on the international scene, she admires the sounds of Erykah Badu. Being in love with reggae music, Timuna says she writes with the sounds of the genre in mind but does not want to be limited to just one style of music, hence her fascination with Erykah Badu. “I like her sound, and it sounds similar to what I can do. Sometimes it has a touch of jazz, other times, Afrobeat. Still, I am young in the game. As the saying goes, milk on my mouth, fresh, fresh,” she shared.

Her love of music is energised by a family that is musically inclined. Her father plays piano and her mother sings and writes, even though their belief in traditional professions has pushed her to pursue a career in education. As a teacher, Timuna has shared her passion for the performing arts, which “only makes me feel like it’s pulling me towards it more”.

This year, she played the game of chance to start recording music professionally, first with Grammy-nominated harmoniser Ruel ‘Klyve’ Moncrieffe, who has worked with reggae soul singer Etana. He produced and did the backing vocals for her I Love Life debut single.

She shared, “Being a new artiste means I am constantly learning about the business and the platforms to share and stream music. I didn’t do a lot of promotion for the track, and the mere fact that it has 3,000 views on YouTube when I don’t know that many persons, for me, it is doing well, and the potential is there to expand my reach. I am watching other young entertainers like Tessellated – so creative – Samory-I, and Joby Jay, whose sounds I both love, and would love the opportunity to work with them at some point.”

For her second project, which is slated to be released on her 26th birthday on October 26, Timuna worked with keyboardist Courtney ‘Bubbla’ Edwards to compose a reggae remix of sorts to Nigerian singer Omawumi’s In The Music. Timuna’s track, titled Get Into The Music, was mix and mastered by the recently deceased Barry O’Hare, who she says motivated her to do it.

“There’s no turning back. I must honour the work of the people like Barry, who are involved in the making of the song. My music is wholesome, clean, feel-good music, and it will be how I share myself with the world,” Timuna said.