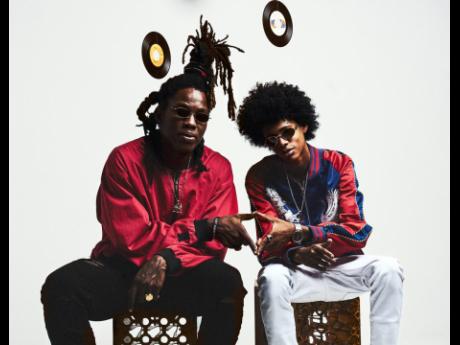 The art of collaboration may not be as simple as dipping a paintbrush into paint, but when Blvk H3ro (pronounced Black Hero) and Wayne J found themselves staring at the same canvas, more than once, the lyrical artistes decided to aim for a musical masterpiece. The recording artistes rise from different generations. Blvk H3ro, given name Hervin Bailey, is poised to stir it up in reggae as one part of the tribute group The Wailer’s Trio, and Wayne J, by the age of 12, had recorded the radio hit 18 and Older that demonstrated wisdom beyond his years.

“We found a way to make an impact; at the same time, package our individual styles in a real way that people can appreciate our skills and lyrical ability. It bridges the gap between the different generations and set a pace where more artistes will be inspired to work together, leggo some of the unnecessary conflicts and make some big tune that will ultimately build careers,” Wayne J told The Gleaner.

The Original track, released earlier this year, was the perfect amalgamation of the young music masterminds, which he says, “after the completion of the project, it only felt right to do a full project where both of us as artistes display our different styles”.

“It’s a natural phenomenon; I’ve known H3ro for a while now. We have been making music around each other for years, but it was just in the stars for us to do music together and at this level. Once Original was recorded, all the other songs magically came together without any serious premeditation,” Wayne J continued.

Nearing the end of extensive writing and recording sessions, the artistes compiled what has been dubbed New Millennium.

“We want it to be a project that will represent for the current generation of music lovers, but also stand the test of time to live on and inspire the next generation that will forward when we gone – we’re laying the blueprint for the next millennium, not just this one, similar to those classic albums our parents gifted us with,” Wayne J explained.

Blvk H3ro added, “This project is a statement from us as the new generation of Jamaican musicians. We grew up consuming the music of our parents and their parents, and now we as the youths are using our voices and singing the songs in our style and pattern. New vibes, new style, but with old-school sensibilities.”

The album is etched in vintage-dancehall instrumentals and pays lyrical homage to originators, from King Jammys to Super Cat. There are jaw-dropping moments while listening to the voices of Blvk H3ro and Wayne J, both performing at the proficiency of seasoned veterans. The solidarity is admirable, even though for them it doesn’t come as a surprise “because we grow in the music like brothers,” said Blvk H3ro. “The connection has been good, creating music together, training on stage and preparing for the time we would step out together as we call it, the top team.”

Blvk H3ro’s music video for Kush & Schweppes, one of his earlier productions, was filmed on the doorsteps of Wayne J’s house in Waterhouse; several years later the two stand in the same place shooting the video for what would be the catalyst to more collaborations. Speaking of collaborations, fast-rising dancehall deejay Skillibeng is the guest artiste on Young Boss Remix, which happens to be the album-closing track.

“It’s like the universe brought together a dream team inna music; this is another one of those magical stories with this project. Linking with Skillibeng was organic, and it just so happens that he is based out of east, like us. While on the ends, he mentioned how much he rated Young Boss and the next thing I know, we have the sickest Skillibeng verse to make history with,” Blvk H3ro shared.

“From the very beginning when Wayne J and I decided we wanted to be artistes, it has always been a team of us working together to make the dream work. Artistes, producers, creatives; and at one point Wayne J’s dad was the maestro. This is our vision coming to life, and the plan to build a strong team that will put out some great music together,” Blvk H3ro said.