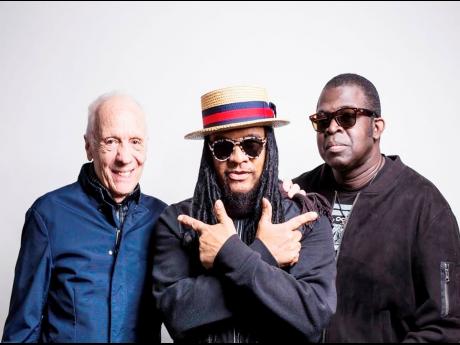 Chart-topping musician, singer-songwriter Maxi Priest, producer and mixing engineer Livingstone Brown, and ‘70s rock guitarist Robin Trower, all uniquely and directly influenced by soul and gospel, melded their ideas to present a United State of Mind, a single which transformed into a nine-track album.

Some albums are immediate while others take a little longer to work their way into the listener’s subconscious, and from the album’s first moments to its final ones, it is composed of lyrically sharp songwriting, crisp and captivating instrumentation and memorable imagery which makes it fall into the latter category.

The three musicians deliver it all with United State of Mind, Priest’s soulful singing, Trower’s impassioned playing and impeccable guitar riffs, along with Brown’s golden touch on keyboard and adding the fine details, the album brings together all the elements in a solid, cohesive record which can play on repeat and still find new twists and turns within the music.

During a private virtual listening party last week, Brown, the architect of colossal musical projects with Tina Turner, Kylie Minogue, Corrine Bailey Rae and Ed Sheeran, explained that establishing a foundation for a song was at first “tricky”, when he considered the musical background and illustrious solo careers of the two. “I was thinking Robin and Maxi come from different worlds, oh well, this is not going to work. The both of them are like bullet trains when working on music,” said Brown, who worked with Trower for 35 years and Maxi for 30 years.

On paper, there was no precise formula to start the song-producing fire. All the while, sketching in his mind ways in which the three of them could combine efforts for one song, after a chance meeting at his studio in Brixton, UK, the musicians hit it off. Brown could finally breathe a sigh of relief. He said, “Never could I imagine that they could get along to work musically but the songwriting process was natural.”

The virtual party’s guest list, which included close family and friends, several music industry professionals, as well as select media, totalled over 100 persons across the globe – though due to social distancing it lacked a live-performance element – all witnessed the musicians’ emotions which relentlessly oozed enthusiasm.

The common denominator propelling their work, according to Priest, was that all shared that passion and deep appreciation for music of all genres. It is a blend of reggae, blues, rock and roll, country, jazz and folk music. Each song showcased Priest’s risk-taking ability to mix the fundamentals of several genres into his vocal tone while remaining true to his core audience – reggae. And the message is togetherness. Priest expressed, “No matter what colour, class, creed or race we are like-minded people. This is clear from our union, that even though we come from different musical backgrounds, in a strange way we found something we all appreciate.”

For the blues-rock legend Trower, a musician who critics have said uses his fingers to do the talking, “the genre is soul for 2020”, he answered, as more guests agreed that the sound was unlike anything they have heard. This new record is unlike any he has done throughout a career that spans over five decades. The Bridge of Sighs multimillion album seller spoke less than his cohorts but all the expressions on his face, when he appeared on screen, were of fulfilment.

While the name of the genre was left undeclared, the expectations are that “it’s going to touch people from all walks of life in so many different ways because it comes from uniting the three of us together – three different thoughts – in exchange it is our dream that it will contribute to the unification of the world”, Priest added to the conversation before the virtual party ended.