No legendary thanksgiving service for Toots 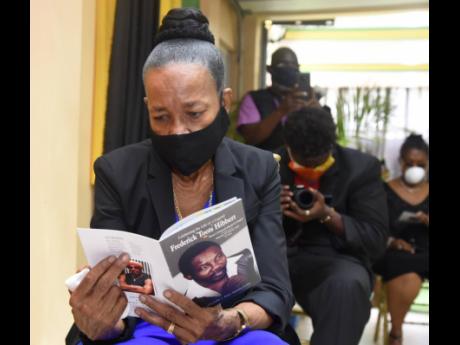 Kenyon Hemans/Photographer
Doreen Hibbert, widow of the late Toots Hibbert, was overcome with emotions as she looks through the funeral programme during a private funeral service for the late reggae icon, at Perry’s Funeral home yesterday. 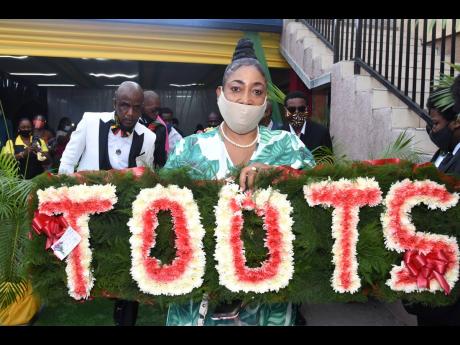 Kenyon Hemans/Photographer
A close friend of the family leads the pallbearers out of the chapel. 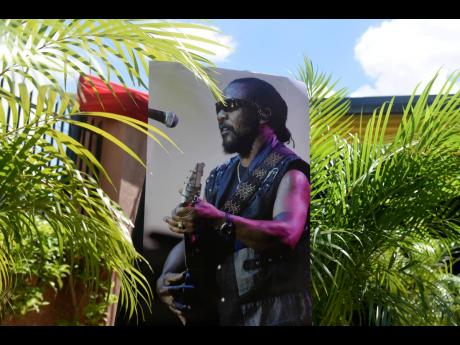 The cover of ‘Toots’ Hibbert’s funeral programme declared that the Hibbert family was “celebrating the life of a legend”, but in reality, there was little to indicate the legendary status of the man for whose life few had gathered to give thanks. In life, the internationally acclaimed ska, rocksteady, and reggae icon Frederick ‘Toots’ Hibbert enjoyed the musical stature of a giant, but in death, that stature was not reflected.

Owing to COVID-19 restrictions on funerals, the service was held on the grounds of Perry’s Funeral Home, in its chapel. All protocols were observed; chairs were placed feet apart, all mourners were in masks, and a Perry’s employee was assigned to wiping the microphone each time it was used. There is no doubt that Perry’s team played their part in trying to make this send-off one that was befitting. The chapel was decorated in red, green, and gold, and a picture of Toots adorned the entrance, while on the outside, a speaker resounded with songs from the legend’s extensive catalogue. The male team members looked sharp in their red, green, and gold bow ties, which were specially designed to be worn at Toots’ thanksgiving.

“Toots is an icon. Everybody wanted to do this funeral, and the family chose us, so we are grateful for their faith in us, and we are ensuring that this legend is given the best treatment,” Perry, a great fan of Toots, told The Gleaner.

The short service took the usual format with scripture readings and musical selections from family members and friends, but there were hardly any tears. Toots’ children Clayton, Emley, and Leba all paid tribute in song via the playing of their pre-recorded vocals, while Cat Coore did a video recording of himself and Rupert Bent playing Always Around. Singer extraordinaire Pam Hall was the only live act and, along with Maytals band member Jackie Jackson, the only member of the music industry present. Toots’ family from Treadlight in Clarendon was noticeably absent, and so, too, was his eldest daughter, gospel singer Jenieve Hibbert-Bailey, who was on the programme to do a tribute to her father.

The highlight of the service, which was void of all government officialdom, was, undoubtedly, the reflection by Jackie Jackson. He spoke of a fantastic journey alongside Toots when Island Records put together the group Toots and the Maytals. He recalled a 1975 concert where Toots and the Maytals was the opening act for big names like Linda Rondstadt inside a stadium filled with 90,000 people. “We were onstage, and when Toots came out, he walked by us and whispered, ‘We are going to be great. Watch me and dem’.”

With that, Toots went up to the microphone and kicked the stand, and while it was in motion, he did a split. “Him kick it again and lick another split. The crowd roared, and him kick it a third time and lick another split, and the stadium turn upside down. We were called back on stage three times,” Jackson said, still looking as if he was experiencing the thrill of that moment.

The family had announced that the media would not be allowed to be part of the service at Dovecot, where Toots would be interred. However, those plans had to be abandoned as the burial order could not be found. Toots’ body had to be returned to the morgue.