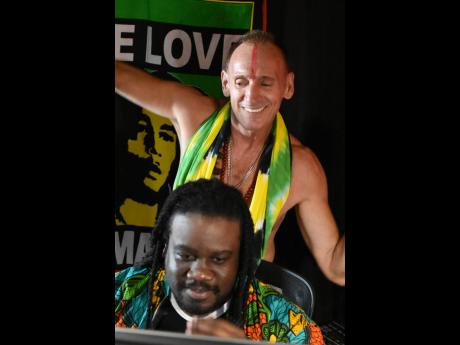 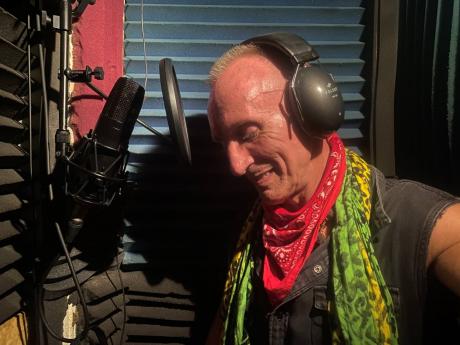 Gregory David Roberts makes personal and cathartic statements that carry the weight of the secrets he’s held for a lifetime. Now, they are escaping through his music in the recently released Love & Faith album, which the musician recorded in Jamaica.

Known for the internationally acclaimed novel Shantaram – which was published in 2003, translated into 41 languages and sold over six million copies worldwide – the author reveals yet another layer of himself.

The novel was Roberts’ first narration of his fleeing to India in 1980 after breaking out of the Australian Pentridge Prison. But, it was not all about living in fear for 10 years, off the radar and then dealing with the repercussions. He wrote part of the book while in solitary confinement, his punishment for escaping.

“For a lot of men two weeks to two months down there wrecked their minds, but for me, it happened at exactly the appropriate time. It was the right meditational space I needed to confront myself. The first year I did a lot of bellyaching and kind of shifting blame,” Roberts told The Sunday Gleaner.

In a nutshell, the Gregory David Roberts people have come to know, he said, is a result of time spent in solitude.

He said, “By the second year, alone in a cell, none of that works any more because you start seeing the truth for what it is. That is, most of the pain and humiliation in your life is a beast of your own creation, and you start shifting the responsibility where it lies, to yourself. At the end, I was a different person. I came out of there with a sense of purpose, but also a sense of direction, knowing I wouldn’t go back there.”

Books were not all the then-fugitive penned. Born into a musical family, his father was a tenor and his brother Nick Smith, a long-time songwriter for the popular blues-rock band The Black Sorrows. So, writing lyrics to a rhythm was not an entirely new quest for Roberts. Still, he never recorded those written in prison. But, he speaks candidly of his adventures as an outlaw, making each one appear more thrilling than the next. From his strivings as a member of an underground band called Rausschmeiss – which because of his illegal status, could not accept a recording deal they were offered – to performing live in piano bars as a means to survive while on the run. He is honest when he states, “it was a terrible shame for my mom (whose last name he acquired following a deed poll), I know I shortened her life – I tormented my family.”

“There was sorrow in seeing somebody who had every chance in life, a leader, on the front of the newspaper then [sent to prison], for robbing people with a toy gun to feed a drug addiction. It was a tragic fall,” he continued.

Roberts escaped prison in the second year of his sentence for robbery. He spent 10 years on the run and was captured in Germany, where he spent 19 months in lock-up and was later extradited to Australia. Back in an Australian prison, he served a further seven and a half years in prison, two of which he spent in solitary confinement as punishment for escaping.

Speaking to the novelist-turned-musician ignites the same nostalgia of a familiar book, all drawn from inner struggles and personal experiences.

“I am the first person in the history of [the] family to commit a crime. The family is sprinkled with professors and medals of honour for those who fought valiantly in wars – typically academics and soldiers – I was an anomaly in prison, so, I was questioned for my actions. Life threw a curve ball, and I didn’t have the right stuff to deal with it. I had to rebuild by saying ‘this is on you and you better make it right’, basically, I had to earn back the respect,” Roberts explained.

He combines all his thoughts and emotions into music with the 16-track Love & Faith compilation, which is co-produced by Dale ‘Dizzle’ Virgo. Songs like Drive All Night, A Fool or a King, Deliver me, If You Loved me Again and Upon my Soul serve as a time-lapse through multiple genres that soothes the soul.

The roster of talented artistes such as D’Yani, Saine Rapley, Janeel Mills and Ch4se ,who were invited to record at the Geejam Studio in Port Antonio, span reggae, dancehall, jazz, country and pop music. This adds to its newness, but it is the combination of vocals, with his fingers almost making love to the instruments, exclusively taking listeners on a drive on a Long Lonely Road, that stirs a revival of deep-seated emotions.

“Jamaica itself is an emotional discovery; it’s not of my findings, but of my soulmate and her insistence for nine years, telling me I would love it. At first, I asked the reason, an ‘India-man’… who goes to India at least five times a year, would love Jamaica,” he said. In fact, by the time of the interview, he was two cups of coffee in, his Mala beads were resting delicately around his neck on. His forehead was marked with Chandan Tika (a traditional paste made of sandalwood and other herbs used for meditation).

“It so happens at my request for my management to find capable, versatile singers with warm, rich voices, and engineers who understood the importance of a spiritual connection of music, when I was ready to record five songs, I ended up in Jamaica in 2016.”

Ten minutes from the airport, Roberts said, “I love it” and 15 trips later, he is halfway through the process to settle here. This month also marks one year since Roberts has been on an extended stay on – a decision catalysed by the pandemic – where he continues to impart knowledge to upcoming and established artistes, while creating music.

“We have so much further to go with the team of young performers; not only am I an admirer of what they do, but I am an admirer of how they do it. The musicians we worked with are so clever. I want to push and explore all that we can do together!” he exclaimed.

Noting, he has had several life-changing occurrences, he expressed a wanting to connect with anyone dealing with their own internal battles.

“As an artiste, we have no right to decide how the music is perceived; it is my hope rather than expectation, that there might be one song that helps a person to deal with struggle or keeps tenderness intact. Music can console, no one can take that from us,” he said.