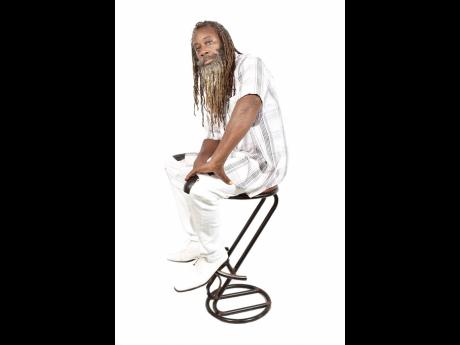 Contributed
Dickie Bonnick is preparing to release one of his biggest compilations yet, a 40-track LP of original songs titled ‘DB40’, which he has been working on for more than a year.

When Jamaica first met Dickie Elijah Bonnick in the mid-’70s, he was a 13-year-old well on the way to being ordained as a minister of religion and a gospel recording artiste. He went by the name Prophet Elijah, using his middle name for the majority of his career even as he transitioned to conscious reggae music. He said it became important to change his name because too many artistes and ministers went by that name.

“The Prophet Elijah is a good name, but it takes too long for persons to find my music on the various platforms. It took a while for me to realise this, and since nobody, to my knowledge, has my name, I started using my birth name,” he told The Sunday Gleaner.

“Prophet is not a fake. That is who I am. I am not one of those prophets that prophesy after an event. I always prophesy and send the message to the appropriate person or people long before it comes to pass,” he continued.

Bonnick has spent much of his professional recording career, since the release of his debut single Y2K, wrestling with the penchant for the reggae genre and mission to spread the gospel.

He said: “One of the things I discovered over the years is inspiration only comes from one place, the one true God Almighty, no other place. So anything God lays on the table of your heart to edify it, to save His people, nothing can be wrong with it. I may be one of the first and few ministers of religion doing roots reggae. It is my belief that music alone shall live, and the Bible tells me that music is in Heaven, and it was never written that it is righteousness or reggae.”

The 59-year-old singer who balances his responsibilities as a father of 53 children, the eldest in his 40s and the youngest a two year old, and his duties as the presiding bishop of the Peace Mission Seventh-day Church of Christ in his hometown of Clarendon, said that it is humanly impossible for one person to preach the gospel and fill the whole world with the message.

“The more hands-on a site, the building move faster, and while we have some great artistes, some passed and some still carrying the torch, there is space for more, and I want to join the minority that is doing their best. It’s not impossible. So whichever way a person can get the message out to the people in this world is acceptable, and we will find that not everybody listens to gospel music. There are those who are charmed by pop, country and western, reggae, and the whole works, and it is my duty to put music on the market to feed more than one audience. In my catalogue, there will always be a song with the message of repentance from one thing or another,” Bonnick shared.

On the strength of two gospel albums, and twice as many roots reggae albums, Bonnick has become popular for his musical prophesies and style of music, but outside of the world of gospel music supporters, Bonnick may still be known as a songwriter who could not read or write at the beginning of his career and as a radical singer with his most successful 13-track album Kill A Day, being of the reggae genre.

Bonnick looks determined to release one of his biggest compilations yet, titled DB40, which is an extended LP that he has been working on for more than a year, with approximately 40 original tracks.

For anyone thinking 40 songs is too much to digest, the singer, who also plays the role of executive producer, has broken them into three discs subtitled Love City, Not Over Yet, and Black History, remarking that “three compilations, the charm”.

Bonnick feels a sense of great achievement knowing that his music is hitting the market in places beyond his reach such as Europe, Africa, the United States, and Asia, and is doing extremely well. He is confident that his music will be on every Billboard chart in the world and will hit the market platinum. With a history of dropping jaws through his ministering and lifestyle, the veteran singer, who as Prophet Elijah entered and made it to the top 10 in the Jamaica Cultural Development Commission Festival Song Competition in 2003 and the Red Stripe Big Break Competition back in 2006, has extensively mapped out a comeback record.

The DB40 anthology looks certain to make a big impact on the marketplace as the roots reggae singer plans to release two tracks weekly following the album launch this week Wednesday, December 9, and he is anticipating a big year ahead of him.

“I am doing this for two reasons: Bob Marley, as well as Peter Tosh, Jacob Miller, and Gregory Isaacs created legacies in the reggae music industry, and leave it here, but so far, the system has been putting an axe to the tree root and chopping it down. I needed to see how best a way to keep reggae music alive and their spirits alive and restructure the music like how it supposed to be,” Bonnick said.

“There are people trying to do that, but not enough, most of the artistes we are seeing and hearing are different from roots reggae. Secondly, I wanted to create history by putting out an album of this magnitude that teaches us about who we are and where we are from, and peace and culture.”

Notably, the produced set includes non-denominational topics in songs like Baby Girl, The Truth, Worries and Problem, and Beautiful Sunshine, which Bonnick expects will educate the youth to bring back the roots. Rounding out the lengthy LP are a few collaborations, including one titled Parasite, featuring SympleFlexx, recorded over a year ago.

“I want to see a crime-free world, and through the breadth of my music, I am calling on the youth of this world because it is through the youth things can change. I am not a teacher in the class. I am going to teach through music, and I see where my music can reach the world. The messages I transmit through my music serve to indoctrinate the future generation to separate themselves from the mental oppression through true divine inspiration. My own youth, all educated up to college and those that are babies headed in the same direction, are already following in my footsteps as preachers spreading the message,” he said.