Marcia Griffiths: ‘I feel deeply in my heart about him going’ - Ronnie introduced me to late husband Byron Lee, says Sheila Lee 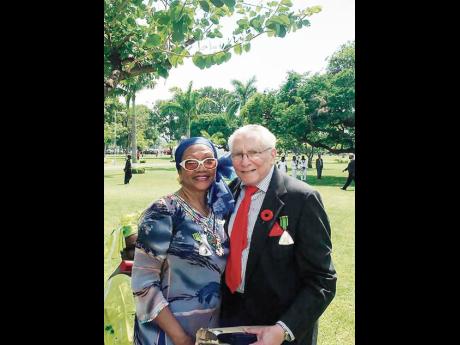 Contributed
Reggae songbird Marcia Griffiths and Ronnie Nasralla in 2013 at King’s House after the National Honours and Awards. 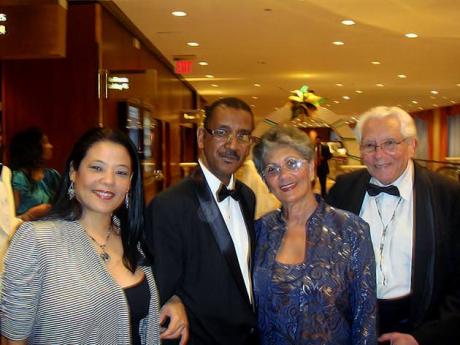 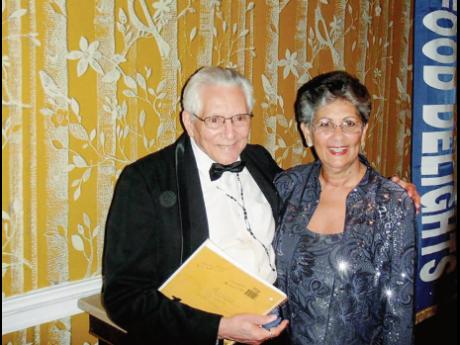 Contributed
Ronnie Nasralla (left) and Sheila Lee at the grand ball for the Jamaican Independence Celebration Foundation Inc, in New York in 2011.
1
2
3

Ronnie Nasralla, who is known widely as an artiste manager and advertising strategist, was integral in the careers of Frederick ‘Toots’ Hibbert, who passed last year, and his band, The Maytals, among others past and present, who shared a passion to popularise ska to the international markets.

While his professional career started out primarily in advertising, Nasralla leaves a huge legacy spanning more than 50 years of production including Toots’ 54-46, on which he is credited as the executive producer, and Daddy, It’s You, as well as the Wings of a Dove hit by The Blues Busters that will continue to echo in global music. He is celebrated for the work he did with Byron Lee and the Dragonaires as the band’s manager and played a major role in navigating their musical ship to the international markets.

“My heart is broken. I knew my dear friend was on his way out because we used to speak very regularly, then it changed, to his wife, Rosemary, relaying the messages to me as he was having more difficulty speaking,” said Sheila Lee, widow of Byron Lee. “I also couldn’t find it in my heart to call him after his son, Hamilton, died tragically in September. Not only am I not at my strongest (living with a heart condition for almost 30 years), but I was also recovering from another illness.”

Lee said Nasralla was friends with her parents as usually persons with the age difference they had (of 12 years) do not socialise, but their love of dancing became a shared interest. Throughout his journey, Nasralla maintained a simple philosophy on life: to live it.

“He knew I loved to dance, and he was a dancer himself. Ronnie was like a fun, big brother to me, and he looked out for me. I relocated to New York in 1961 at age 18 and we never reconnected until the band was going there for World’s Fair in 1964, which is when I met Byron,” Lee told The Gleaner.

She added, “For my daughter Julianne, his passing brings back nasty memories of her own father’s death. That’s her uncle Ronnie, you know what I mean. In fact, Ronnie is the one responsible for me meeting her father. He was family, and as I say that, I must note that he is a family man, which reflected in the way he raised his seven children, two of which he adopted from Tivoli Gardens and made sure all of them received the best education.”

His book Lessons to Learn, which not only chronicled his life and work, naturally included information people could learn from. As a former teacher of Campion College (back then called Campion Hall), jazz pianist Monty Alexander and the late Gordon ‘Butch’ Stewart were among his charges, but he was also integral in the mentorship of not only men, but women as well.

Lee’s daughter Julianne had the privilege of learning from him directly, too, hailing the impresario as one of her greatest teachers.

“Uncle Ronnie may have had many roles, but he played a significant one in my life from childhood to adulthood. I learned so much about marketing, advertising, promotions, and productions from him. Being around him and dad was a fierce teaching moment. He was a gentler person, very protective, but he and my father did a lot of events together, and eventually, he ended up working with a full schedule of artistes. They were equally active in the movement to explode Jamaican music overseas and locally as well, with presentations like the Glenn Miller Orchestra through the matinées. I can just imagine what the two of them are up to now,” an emotional Julianne Lee shared.

Nasralla’s work resonated with many ska and reggae recording artistes – by 1965 he had over 50 local acts under his management – because of his commitment to propelling talented youth. He also enabled the launch of the careers of the likes of several, including Marcia Griffiths, who, upon her receiving the news of Nasralla’s passing said, “Don’t say it! Oh my goodness!”

She continued: “This is a man I talk about in a lot of my interviews. I am so sorry to hear that. I feel deeply in my heart about him going because I can’t remember the exact time we last saw each other, but I know I was overwhelmed because of the history.”

The I Shall Sing songbird said that her first time on stage was facilitated by Nasralla’s presence.

“I remember it clearly. I walked on the stage at Carib Theatre on Easter Monday morning to perform with Byron Lee and the Dragonaires, which was when I met him. He was not present at the rehearsals, but Phillip James of The Blues Busters insisted on Ronnie to make it happen. The rest of them, the artistes themselves, were intimidating for me as an innocent 12-year-old girl,” Griffiths said. “I don’t think they wanted me to go on as none of them really knew my ability, and Ronnie was the one encouraging that I get the chance, and when I performed, that was that.”

Although Nasralla showed interest in managing her career that same moment, Griffiths ended up leaving the performance to record with Studio One’s Clement Seymour ‘Sir Coxsone’ Dodd – both record producers had offered her recording contracts.

“In my travels with the band as a Dragonairess, Ronnie acted as my manager, but it was a toss-up between him and Mr Dodd. Ronnie so desperately wanted to manage me, and both of them went to my father after I performed to make their proposals. He, along with Byron Lee and the likes of Tony Verity, remains a part of the history of my career by having a strong impact. So my condolences to Ronnie’s family. He really had a big heart,” Griffiths said.

Nasralla celebrated his 90th birthday last November. He was appointed to the fifth highest rank of Order of Distinction for his contribution to the development of Jamaica’s music seven years prior.