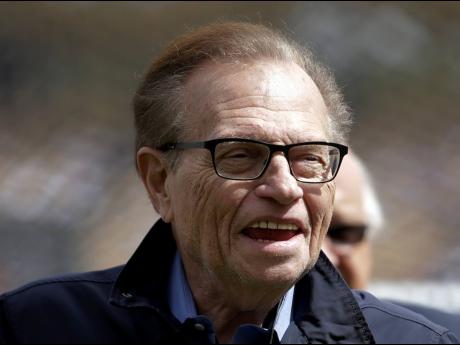 AP
Talk show host Larry King died on Saturday, at Cedars-Sinai Medical Center in Los Angeles. He was remembered by a number of celebrities and interview subjects including Bill Clinton and Oprah Winfrey.

On social media, King was remembered by a number of figures and fans, including singers Barbra Streisand and Bette Midler, entertainer 50 Cent and actors Reese Witherspoon, George Takei and Albert Brooks.

“I enjoyed my 20+ interviews with Larry King over the years. He had a great sense of humour and a genuine interest in people. He gave a direct line to the American people and worked hard to get the truth for them, with questions that were direct but fair. “Farewell, my friend,” former President Bill Clinton wrote on Twitter.

“It was always a treat to sit at your table. And hear your stories. Thank you Larry King,” Oprah Winfrey tweeted.

Gregory Sierra, who had memorable roles in the 1970s sitcoms Barney Miller and Sanford and Son, has died after battling cancer. He was 83.

Sierra’s widow, Helene, said Saturday in a phone interview with The Associated Press that the actor died on January 4 in Laguna Woods, California.

Sierra’s breakthrough came in 1972 when he played the role of Fred G. Sanford’s neighbour, Julio Fuentes, on Sanford and Son. He also earned major attention for playing Sergeant Miguel ‘Chano’ Amanguale on Barney Miller, which launched in 1975.

“He was an amazing human being, different than any other person, male or female, that I have ever known,” Helene told the AP. “He just was extremely intelligent and a brilliant actor. He had a heart (of gold). Any time that somebody needed something, he would be there for them and he defended the underdog any time. And he was a very charming man. He was truly a man’s man and women fell in love with him all the time.”

In addition to Helene, Sierra is survived by his daughters, Kelly and Jill, and his granddaughter Emma.