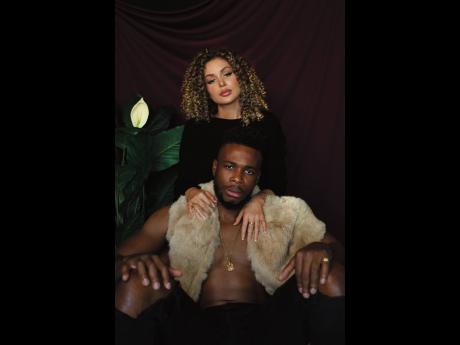 Contributed
OT and Elesia hope to make waves as a musical duo.

Not everything is black and white, especially when it comes to love and making music. Sometimes there are many shades – at least for Elesia Iimura and Solomon Otega, who goes by the moniker ‘OT’. Though from different cultural backgrounds, Elesia, born to a Japanese father and an Australian mother, and OT, born in Nigeria, were able to make a connection through music and continue to be influenced greatly by what brought them together.

“The one thing about music is that it knows no race. It is free – just like love – and for us, music is life,” said OT as the two spoke with The Sunday Gleaner via telephone. They are on vacation to celebrate Elesia’s birthday on Hamilton Island, which is nestled in between the Great Barrier Reef and the coast of Queensland in Australia, where they reside.

In following his heart, OT said he started recording music as part of a “boy band” in Nigeria, but when the group separated, he moved to Australia in search of other opportunities. The two recording artistes first locked eyes three years ago at an event, and as clichéd as it may sound, “it was love at first sight,” OT shared, and before long, the Nigerian charmed the singing belle to join him on a date.

“I suppose both of our careers at the time were low-key and with our meeting each other, it reignited a passion. Elesia’s music is influenced by a lot of genres, including Jamaican dancehall and reggae, but before her, I was not really into that type of sound. My influences were more on the authentic Fela Kuti-style Afrobeat,” he said, noting that Bob Marley was the only reggae artiste he was in tune to until now.

“She introduced me to more artistes. Now, I kind of like what she likes, maybe a little Aidonia and Gyptian,” OT continued.

Elesia, on the other hand, poured out her love for reggae and dancehall, stating that having elements of the genres in the rhythms she recorded on was necessary for her.

“For years, I was influenced by Caribbean music, specifically Jamaica’s dancehall, with Vybz Kartel, Mavado, and Gyptian being the first influences. When I began working with producers, I would always request that we add a bit of that contagious flavour into the sound and the songwriting, and eventually we did get one fit for a Jamaican artiste,” Elesia told The Sunday Gleaner.

Elesia recorded with Agent Sasco on Crazy, which was on his Theory of Reggaetivity album, released in 2016 and then Come For Me in 2017, with the video shot in Jamaica and released the following year. Both tracks made waves across the US and the UK and played on several international radio stations and on BET Jams.

Now, OT and Elesia are endeavouring to create a tsunami as a musical duo. Whenever you hear Elesia, you will hear OT and vice versa, she said. “We already connected spiritually and have a playful chemistry, so why not. In the height of the COVID-19 lockdowns, there [were] more chances for us to listen to some beats and write together. It is a beautiful way for us to express our love for each other amongst the distraction that social media creates. It helps us to share our love story.”

The single All Day is their début as OT and Elesia, and from the breezy production, the duo wants to show the beauty of falling in love regardless of the colour of one’s skin or cultural background.

“Growing up maybe people would think differently of me because I was a mix of Japanese and Australian, but I believe the world has progressed somewhat when it comes to race and racism, and yes, we do get some stares, but it’s nothing unbearable. Music creates our background, with our individual ups and downs and cultural experiences, which makes life colourful and beautiful,” Elesia said.

The views for the music video released two months ago on YouTube are steadily climbing, and OT and Elesia are ready to deliver more singles for 2021.

“At the end of it all, music should be used as an instrument to preach love, and we can’t say it enough. We just want to penetrate people’s souls so that they are moved towards real love,” the musical duo said.