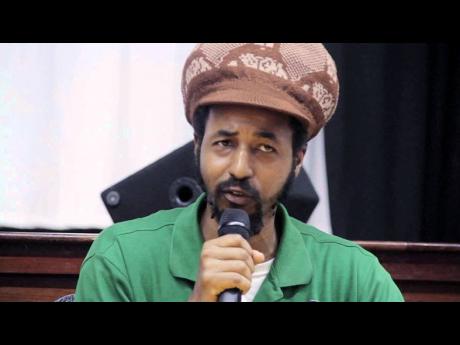 A global collective of Rastafari is presently making preparations to reveal a bold and broad initiative under the banner of the Association of Rastafari Creatives (ARC) said author and publisher Gavin ‘Dutty Bookman’ Hutchinson.

“Basically, what we are doing is harnessing our collective abilities which was not particularly done in the past to develop sustainable means for a wide cross section of people,” said Dutty Bookman, who acts in the position of public relations committee chairperson for ARC.

He added, “The Rastafari community has a lot to offer; if you look at the Rastafari community as a whole, the creative industries have been our strength historically, worldwide, but we really never channelled that for the benefit of the community - its elders and youths - the internal social concerns and also to put to use for humanity.”

He said that ARC intends to provide networking opportunities to its members, which will see fellow Rastafari creatives in Jamaica and globally pooling resources to create a firm sanctuary. It is relevant in today’s society he said, “as an entity which will assist our members in terms of business plan creation and PR support,” noting the organisation’s mission is to facilitate public relations support for projects and programmes that are in line with the vision of Haile Selassie I for the development of Africans at home and abroad as well as the teachings of Empress Menen Asfaw.

“We intend to build connective tissue between, and among creatives and help strengthen the community where needed. So far, our reach spans a wide representation, not in only Jamaica, but also the US, UK, South Africa, Ethiopia and Ghana. Emperor Haile Selassie I was a well-known statesman revered globally for his humanitarian spirit and we see ARC as an opportunity to fulfil the creed, ‘let the hungry be fed, the naked clothed, the sick nourished, the aged protected, the infants cared for, and the illiterate enlightened’, following his example,” he continued.

There are 40 founding members with 11 persons on the executive team, serving as one of the co-chairs of the various committees ranging from agriculture and youth to development and education. In addition to its Alpha and Omega presidents, there are Alpha (male) and Omega (female) chairs of each to ensure balance. Recording artiste Hempress Sativa, visual artist and fashion and graphic arts entrepreneur Tamara Kae Jean and dub poet Asafo Weedamiah are some of the popular figures forming part of the executive body.

“The global influence of Rastafari culture at this time is undeniable,” said Asafo Weedamiah, who is a dub poet, educator and ARC’s Alpha president. “It is full time now that I and I harness this energy, and the universal love and goodwill for Rastafari, and channel it towards concrete works that will uplift I and I people.”

Membership is open to Rastafari creatives of African descent and those allies that wish to support the creatives and their goals.

The organisation will host a virtual press launch with distinguished speakers, Dr Julius Garvey, son of world renowned pan-African pioneer and Jamaica’s first national hero Marcus Mosiah Garvey, and popular radio personality Mutabaruka, to share its membership-based, for-profit model for rallying Rastafari operating in the creative industries worldwide. Various dignitaries of the Nyahbinghi, Twelve Tribes of Israel and Boboshanti mansions of Rastafari are also expected to be in attendance.

Another aspect of the association’s public relations focus will be regaining control of certain prevailing narratives concerning the perception of the Rastafari people. This will include the ARC in Action podcast and vlog, plus other campaigns and communications to engage mainstream and social media audiences with perspectives from within the Rastafari movement about issues of concern to the movement.

The convener for ARC is entertainment lawyer Kwasi Bonsu, Esq, who also chairs the annual Jamaica Music Conference. “The Rastafari nation has never had a centralised mechanism to generate profit for the sole purpose of developing its people,” said Bonsu, explaining the impetus for calling together different creative professionals in Jamaica, the USA and elsewhere to participate in weekly Zoom meetings since May 2020.

“If Rastafari was a recognised nation, then the creative industry would represent its largest export sector. In light of this fact, it was important to create an institution that could harness the potential of its creatives for the purpose of directing resources to Ras Tafari projects and programmes. As the global impact continues to grow, the need for collective action and the need to control the narrative about Ras Tafari by Rastafari has become self-evident,” he continued.