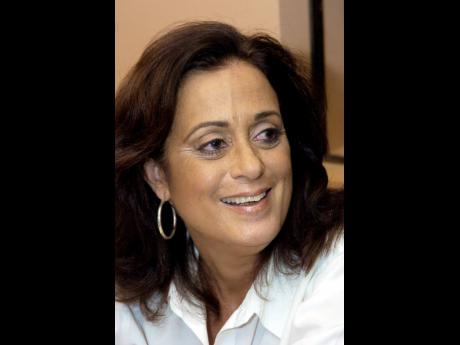 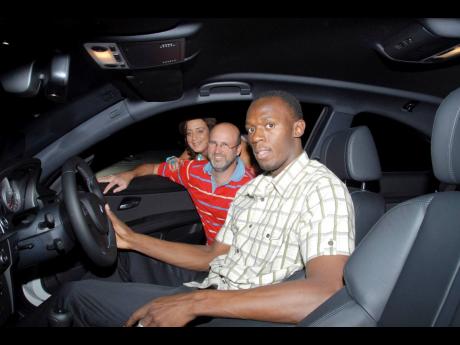 Contributed
General Manager of Stewart’s Automotive Group Duncan Stewart (centre) and Stephanie Scott, creator and conceptualiser of The Gleaner-sponsored Restaurant Week greets track and field star Usain Bolt as he sits inside the new, 2008 BMW M3 Coupe, outside of Acropolis’ Ambrosia restaurant. They were all dining at the restaurant as part of the 2007 Kingston Restaurant Week celebrations, which was sponsored by Stewart’s Automotive Group. 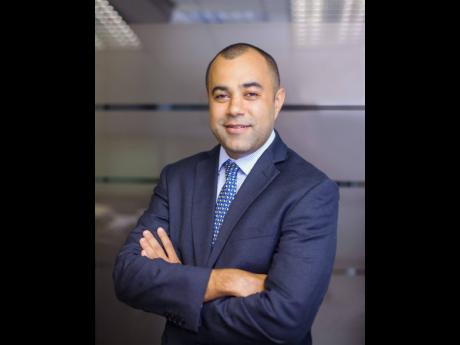 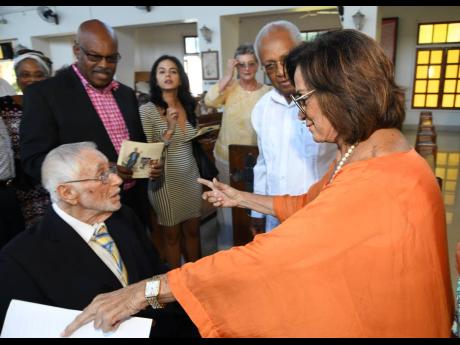 File
Stephanie Scott greets her father, Ralph Thompson, at the funeral of her mother and Ralph’s wife, Doreen Thompson, at Sts Peter and Paul Catholic Church in November 2019.
1
2
3
4

A celebrated entrepreneur, Stephanie Scott’s life had many acts. Her energy, passion and innovation made her an “unstoppable force” in the culinary and event management world.

The founder and managing director of SSCO Event Management taught at Montessori Academy for 29 years before starting her event management firm and bringing Restaurant Week (RW), one of Jamaica’s largest culinary celebrations, to Jamaica.

“It’s true that earlier in her life, she was a teacher. But even then, she was creative, dynamic and bold,” Nicholas Scott, the renowned businesswoman’s son, told The Gleaner.

The managing director of Eppley Limited said his mother died following a car accident on Ash Wednesday near Duncans in Trelawny. She was the only passenger in the vehicle and was preparing to spend the long weekend with friends. She was 65.

Stephanie Scott graduated from the University of Toronto in 1976 with a Bachelor of Arts in child psychology. Her journey in early childhood education began at Florida’s Montessori Academy. She started SSCO Event Management in 2001. Still, no matter the roles she held throughout her life, she continued to teach, whether it was life lessons or private tutoring.

“Like her father before her, she had a voracious curiosity about the world and deep belief in the power of education to transform lives,” Nicholas Scott said. He described his mother as an “edgy intellectual”, who was less a rigid disciplinarian. She promoted the Montessori method of self-directed activity, hands-on learning and collaborative play, and advocated for “freedom of thought and expression in children, decades before it would become trendy”.

Through her SSCO Event Management firm, Stephanie Scott created Restaurant Week in 2005 and reinvented herself, said her son. Initially called Kingston Restaurant Week (KRW), the culinary event started small and grew to feature a number of restaurants, patrons and sponsors. So significant was its growth that the KRW moniker no longer encapsulated what it had become. The event had expanded beyond Kingston to all across Jamaica and over the years had hit the shores of New York in the United States, and Birmingham in England.

“It is truly unimaginable that 10 years have passed since the idea of RW was born. Tentative, but optimistic and energetic, I set out in 2005 to encourage in Jamaicans an appreciation of fine food and dining out. Along the way, I have joyously watched as thousands of diners have feasted, toasted and celebrated the best of Jamaican cuisine,” said Stephanie Scott in 2014 as the event celebrated its 10th anniversary.

“She was passionate about making dining accessible, supporting the restaurant industry and promoting Jamaican cuisine. She was also a bona fide female entrepreneur and businesswoman. She single-handedly built a brand and a business and executed Restaurant Week with her legendary high standards and attention to detail for over a decade. In the process, she brought joy to tens of thousands of people,” Nicholas Scott said.

The Gleaner became a partner at the event’s inception. “Stephanie first had the discussion regarding Kingston Restaurant Week, early one morning with me as editor. I embraced the concept and took it to the product development team. It started a relationship that produced an eagerly anticipated event on the Jamaican social calendar each year,” said Garfield Grandison, general manager of The Gleaner Company (Media) Limited.

Grandison described Scott as “strong and decisive, yet caring”. “She was also creative and demanded excellence for everything she touched,” he said.

“We and the other members of the RJRGLEANER Communications Group will miss her presence, but her impact will remain with us,” shared Grandison.

Not only was Scott eager to make dining accessible, she was also dedicated to giving back. “She insisted that each year Restaurant Week included a social outreach and philanthropic project. She sponsored scholarships and rolled up her sleeves to help less fortunate individuals. To my mother, civic responsibility was a lesson like any other to be passed down to each generation, most recently to her grandchildren,” Nicholas Scott shared.

Stephanie Scott had two sons: Nicholas and Sean, and was a doting grandmother to her three grandchildren, Elliott, Lennon and Stella. Many who worked with Stephanie Scott also became like family; such was the strength of her love, kindness and consideration.

“She was amazing,” said friend Heather Kong, whose design firm for years guided the overall look, feel and theme for Restaurant Week.

“What I cherish, most of all, is her heart. Her kindness. Her compassion. Steff was full of so much love, and she gave it to everyone. She hated to see anyone in pain or suffering, and did anything she could to help. She always tried to lift everyone around her. I was lucky to have shared so many moments as friends. That grew into moments where I was like a daughter. I will never forget her laugh, her wit, her energy, but most of all, I will miss her love,” said Kong.

“Stephanie was Auntie Steph to me and to many of my colleagues and friends. Her background as a teacher made her an excellent listener, coach and, quite frankly, a cheerleader for us,” said Christopher Barnes, chief operating officer of the RJRGLEANER Group and a close friend of Scott.

“No amount of words can express the extent to which Steph has positively impacted lives [that] collided with hers. There are few like her, and so the impact of her leaving is significant. I know I will miss her. Walk good, Auntie Steph. I am better for knowing you,” he said.

For Nicholas Scott, while his mother will undoubtedly be remembered for her “larger-than-life personality, Restaurant Week and her other accomplishments”, he and his brother will remember her most important lessons.

“My brother and I will remember the values she taught us, not least of which are the importance of family, friendship and kindness and the power of education and hard work,” he said.