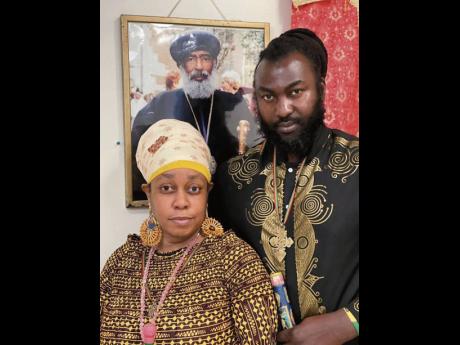 Contributed
Ras Emmanuel (right) with his treasured sceptre in hand, next to his video star wife, Queen Zebulum. 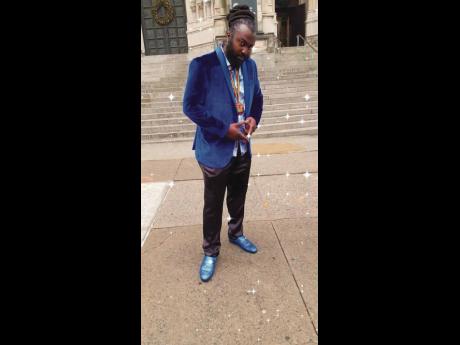 New York Tri-state area deejay, Ras Emmanuel, is sitting at the number one spot for the second consecutive week on the New Jersey Reggae Chart Fresh 92 Top Ten, with his engaging single, Mad Love for You. The song is a tribute to wives, mothers, lovers, partners, side chicks, sisters, girlfriends – all the women in the family circle who make life more abundant, productive and inspiring.

Ras Emmanuel told The Gleaner that he wanted to pay tribute to his wife of 21 years and the mother of his children, who has devotedly remained by his side. “In all the ups and downs of music life, work-life and family life, she has always been a pillar of support not just for me but for the entire family, and so I wanted to big her up in this song and video,” the DJ revealed.

The video has certainly helped to push the song along. The beat and the lyrics are hypnotic. But in feedback comments, reggae music lovers also say the video is alluring and romantic. No hired models are used for the clip. Ras instead draws on his real-life wife to play the lead role, and viewers find that approach honest and compelling. It breaks away from the norm.

“I found that artistes were not bigging up the women in their lives, but sweeping them under the carpet,” he observed. “I wanted to be different, to make it real, so we went to Central Park in Manhattan to shoot the video where we hired a fancy horse and a posh carriage. There, Queen Zebulun and I hugged, winked, played footsie and threw kisses at each other. It was ‘Rastamantic’, as real as it gets, and that magic came through in the video clip,” he explained.

Mad Love for You is on the Central Village Voice label and was produced by Nasir Gowdie and Mark Walcott. The video was directed by Josef Cyril from Cameroon.

Last year, Ras Emmanuel, who hails from White Marl in St Catherine, completed a number of tour dates in West Africa just before the COVID lockdown. And his song Don’t Bring No Guns to Jamaica resonated in a big way in that region, especially in The Gambia.

“I am thrilled that my new release Mad Love for You has topped the chart during International Women’s Month, and I hope that my message will provide more empowerment for women not just in March, but always,” he said, smiling.