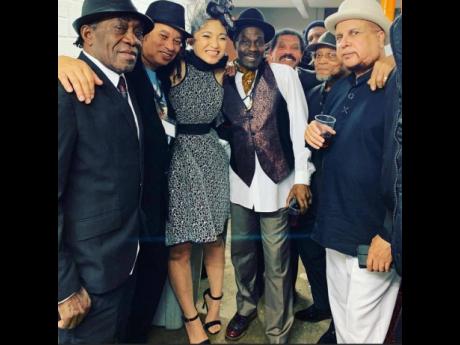 Legendary deejay, Wade Brammer, better known as 'Trinity', has died. His long-time friend, Rodguel 'Blackbeard' Sinclair, confirmed to The Gleaner that the entertainer, who also used to sing using the moniker, Junior Brammer, passed away this morning.

Trinity, who had diabetes, had been hospitalised for close to two weeks at the National Chest Hospital in St Andrew.

Blackbeard and Trinity actually lived on the same building, and it was he who took him to the doctor two Fridays ago because he realised that his friend was not well. "I realised that I didn't see him come out for a few days, not even to check on his car. But true I know that he is a cricket fan, and plus my wife said that she hear him about the place, so I easy myself. But then I go shout him out and realise that him look cringe up and him seh 'Beard, mi sick yuh nuh'. So I carried him to my doctor the following day, and from there it was straight to Chest Hospital where dem put him on a drip admit him," Blackbeard, one of the famous '70s dub reggae music producers explained. He was 67.

He said Trinity had been recovering well, having had a serious spike in his sugar levels and even had difficulty seeing. But then he took a turn for the worse, and the doctors called his sister on Thursday to inform her of the development. "Him sister was right here at my house, and she asked the doctor if it was COVID, and she said no. The only advice the doctor could give her was "Pray". Then this morning, Roy Francis [producer] called and said Trinity had passed. Imagine, his wife Sandra died on March 9, 2018, and Trinity dead April 9. She died right here at home, and from that happen him not the same. He said he couldn't live without her," Blackbeard said.

Another of Trinity's friends, Colin Leslie, said it was heart-breaking. "I got a call from a friend in London; Trinity passed. He had diabetes, and it took him out," Leslie reported.

"It is a heartbreaking situation; we are losing so many of our artistes and music industry player. In the past year, we have lost Bob Andy, Millie Small, Delroy Washington, Derrick Lara, Dobby Dobson, Bobby Digital, Feluke, Toots, U-Roy, Bunny Wailer and now Trinity. It's like rapid-fire. The consoling thought, however, is that all of them gave us joy, and their musical legacy is there for generations," he added.

Veteran deejay, Major Mackerel, told The Gleaner that it was distressing to hear of Trinity's passing. "I am really sorry to hear that him fall out. He had diabetes, and me lose a leg to diabetes. All of us here at Music Town Studio – Harry Toddler, Nitty Kutchie, General B – and also at Sound Waves Studio, man like Horace Andy, Errol Dunkley, Josey Wales – send our condolences," Major Mackerel said, pointing out that Trinity was "a big artiste, a giant, the whole music industry miss him".

He praised Trinity for giving the world some great and unforgettable songs. "Trinity is a artiste who tour the world and is well known, but he didn't get the true acknowledgement that he deserved. You have artistes who work and supposed to get dem reward and don't get it, and then you have those artistes who just come along and get gifts. Trinity had fans all over the world who will regret losing [an] icon. His work stands out, and he is among the best of the best," Major Mackerel emphasised, as he named out his friend's big tunes.

According to his bio, Trinity came to prominence in the mid-1970s, and his career continued into the 1990s. Among his string of hits were Judgement Time, Three-piece Suit and Ting. The year 1977 saw the deejay in great demand, recording more than 20 singles for a variety of producers, including Winston Riley, Tommy Cowan, Joe Gibbs, and Yabby You. His biggest hit, Three Piece Suit for Gibbs, featured Trinity toasting over a new version of Alton Ellis's I' m Still In Love With You rhythm, with a lyric that anticipated the move from 'cultural' lyrics to more material/carnal concerns of the dancehall era.

This prompted an answer record from Althea & Donna using the same rhythm, in the form of the UK-chart topping Uptown Top Ranking. In 1978, Trinity also performed at the One Love Peace Concert in Kingston. In the later 1970s, Trinity began producing both himself and other artistes, starting his own Flag Man label. In 1979, he recorded the duet Funny Feeling with Dennis Brown, and joined up with Barrington Levy for Lose Respect and I Need a Girl in 1979 and 1980, respectively. Subsequent albums met with diminishing commercial success, and Trinity switched from deejaying to singing, releasing the albums Telephone Line and Hold Your Corner in 1987 under the name Junior Brammer.

Trinity is survived by two children, a daughter who lives in England and a son who lives in Jamaica. His daughter is presently making arrangements to come to Jamaica.