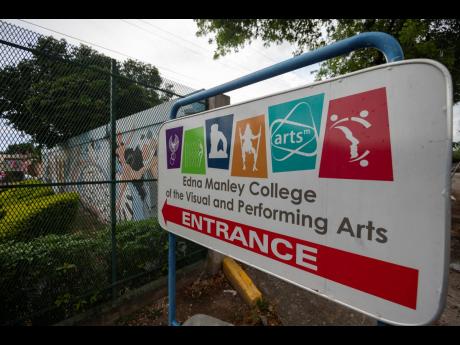 File
The Edna Manley College of the Visual and Performing Arts School of Drama hosted a ‘Real’ production on Zoom last week. 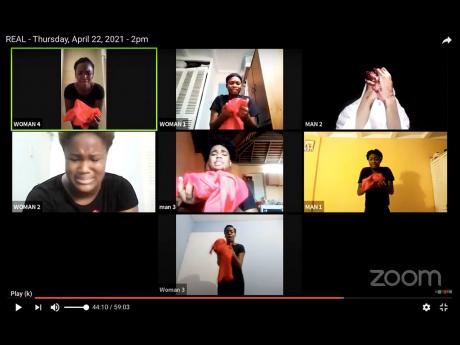 Contributed
The passion of the drama school students in ‘Real’ could be seen in the expressions on their faces as they spoke on violence against women, and crime and the impact on the lives of people.
1
2

Undeterred by the effect of the ongoing global crisis on their education, the future tastemakers theatre continue to zoom innovative productions into people’s homes.

Since March 2020, the students of the Edna Manley College of the Visual and Performing Arts (EMCVPA) have been faced with a dilemma: how does a young practitioner in a field that requires lights, camera and action, and the energy of an audience continue to make and deliver art that feels real and relevant while remaining entertaining? Some students were willing to take on the shift to digital, said Dorraine Reid, the head of the education department for EMCVPA’s School of Drama, but the challenges have been “real”, which happened to be the title of its third production for 2021.

She told The Sunday Gleaner, “ Real is about the urgency to theatre. It at once amplifies the themes in our graduates’ poetry, which uncover topical resonances from daily newsreels. Yet, it makes bare and real the lives of our students who have been physically distanced and restricted by curfews, public assembly orders, and who, despite the availability of the required technology and space, must perform.”

Reid, who also had the role of director, added, “The built-in challenge was to transfer live theatre into a virtual space, while attempting to capture intimacy and interaction that occur among cast members as well as with the audience. There was also the figuring out of how to create special effects in a virtual theatre space with the absence of lighting, set and other theatrical elements.”

Over the past year, those who crave entertainment have witnessed audiovisual theatre delivered through social media platforms, WhatsApp and even interactive games. The Real production was delivered via Zoom. Every person involved had to determine the best theatrical style to use to shape their performances and construct a set within their own spaces, then navigate the platform and other challenges of Internet connectivity and computer interfaces. There was also uncertainty as to what to expect.

“Using this platform to stage this production was an urgent response to a situation; however, it is one which has given rise to innovations. While nothing replaces the feel and catharsis of live theatre, this experiment, an idea of our dean Marvin George, who has been ably navigating the School of Drama through this pandemic, tells us that there is scope for more creative expressions in the virtual space,” Reid said of the Zoom platform being a space for future productions.

There is even a possibility for a marriage of live stage performances done in front of an audience with Zoom theatre, even if it is done in parts, she indicated.

“Creativity has taken on a new meaning, and as a creative, I am prepared to ride the tide to further discovery. As crazy as the idea was, it clearly has opened the door to possibilities, and I’m happy I was chosen to get the ball rolling. I am certain the dean is already planning our next full-length production for Zoom,” she said.

Topics of abuse, violence against women and entertainment culture in Jamaica were tackled in the production through music and poetry to add to the visuals of each character, in their own little box, on the videoconferencing platform.

“I believe the topics connected with and were identifiable to everyone, and some are a reflection of the current state of decadence within the society that they too have to navigate,” said the director.

Poems written by renowned theatre practitioner Owen ‘Blakka’ Ellis, Omaall ‘Majah Bless’ Wright and Tesfa ‘Kronikal’ Edwards, both emotional writers, pulled the different reels together. The cast was charismatic, especially Amoi Duffus and Jonathan McLaughlin, who played the characters, Woman 3 and Man 1, respectively - keeping in character and expressing the emotion that would give any audience member chills.

The Real characters may not have been equally effective as if seen in an on-stage production, but the performance was truly impactful and also makes a deep-thinking critic question the true emotions that some of the students were expressing with each take.

Reid shared, “The students did, in fact, let other others in their personal spaces literally and figuratively, but after a year of doing what has become their norm, this isn’t strange. Emotionally, it was challenging for some of them as they were affected by the issues resulting from their own personal experiences, and likewise, the pieces explored opened old wounds. Notwithstanding, the art is a double-edged sword, so even though the wounds were opened, the performance also provided some healing.”

She said the process was enjoyable, yet nothing replaces the intimacy shared by cast members when they are in the same space.

“With each performance, some students expressed that there are wounds which are still raw, though some are not as affected as they were at the beginning of the exploration,” Reid shared.

“Nonetheless, they continue and utilise the various techniques learnt throughout training to handle the emotional turmoil. Art is therapeutic, and so they find release knowing that they’re making an offering to the public that’s riveting and one that will resonate,” she continued.