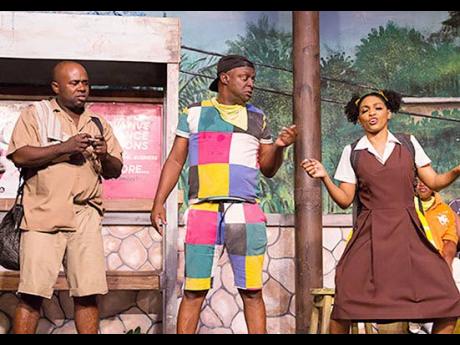 Excerpts from Patrick Brown’s laugh-a-line play, Windscream Posse, will be one of the treats on offer for 20 windscreen cleaner boys who will be hosted by several corporate, civic and religious leaders on Father’s Day at the Aspiring Dads of Distinction outreach, scheduled for the lawns of Devon House. The organisation was founded in 2005 by a group of Jamaican men who aspire to be better fathers by sharing their experiences with fellow fathers, while providing support to and empowering Jamaica’s future fathers.

This particular initiative to support this group of boys was also inspired by the Jambiz Productions’ hilarious and thought-provoking play Windscream Posse, led by actor Glen ‘Titus’ Campbell, who highlights the experiences of these young men who take on daily tasks on the streets to make their livelihood.

Campbell, although not officially a part of the event – “I am not a Dad of Distinction, I am just a daddy” – thinks it is a great idea. Jambiz Production, through the use of comedy, zeroes in on a societal ill, while still managing not to trivialise the situation. Writer Patrick Brown examines child abuse by shining the spotlight on a group of runaways who roam the streets of city Kingston, making a hustle by wiping windscreens.

“ Windscream Posse was entirely inspired by the lives of these young boys,” Campbell told The Gleaner. “It attempts to highlight the plight and circumstances of windscreen wipers. Through interviews with them, as well as personal observation, we unearthed some really unfortunate stories. A boy of 13 or 14 and he’s the breadwinner, because his parent is sick; others who are running away from abusive situations at home and find protection by being among the windscreen wipers. That is the reality of their situations,” Campbell related.

While he is definitely interested in seeing how the youngsters will react to watching themselves being portrayed in the play, Campbell’s main focus remains the impact that the play has had, and continues to have, on the general public.

“We tend to be abrupt and dismissive of these boys, especially when they catch us in traffic at a bad moment. But one of the aims of this theatrical production is to change the way of thinking and encourage viewers to reflect and be just a little bit more sympathetic,” he explained, adding that it has been working.

“People have told me that after watching the play, they view the boys a little differently and will even call them over and give them a $50 or a $100, rather than just ignore them or see them as a total annoyance,” Campbell said.

Windscream Posse, which has now been recorded to fit in the pandemic-era virtual world, will have a showing on Father’s Day weekend.

The organisers say that the focus of the Aspiring Dads of Distinction programme is to “provide the boys with a packaged new look and foster positive personal development”. According to a release, the event has also received a commitment for care packages from Kirk Distributors, inclusive of Gideon Bibles and items from Mother’s Jamaica. The boys will be serenaded with entertainment by Gospel Business Fellowship International Jamaica. Media partners will facilitate live streaming of the event, which will see presentations from social-sector leaders.