Jesse Royal is a ‘girl dad’ twice over

Artiste talks raising daughters and the value of ‘Home’ 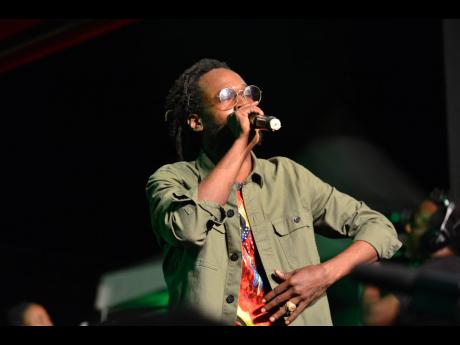 Reggae artiste Jesse Royal calls his sophomore album Royal his “most vulnerable project to date”, and with good reason. “All the tracks were me having conversations with me and whoever else me choose to talk to within a specific song,” he told The Sunday Gleaner, speaking of the successful launch of the project and performance at Live in Wynwood in Miami, Florida.

One track from the album, Home, finds the artiste deep in conversations with his daughters – Yali and Korus. “When daddy is not home, and you feel alone, don’t get too lonely, yuh know Jah love surround we. When I am not around, and you feel alone, I am the silence in the absence of sound,” he sings during the interview.

Royal shared that becoming a parent was not the simplest task but, “being able to transition from being a child to the other side of the fence was a beautiful thing for me. And as great of a father I am, there are incredible mothers I give thanks for – and pray for every single day. I try to maintain a position of understanding and to not feel as though life is all about me or all about the artiste Jesse Royal.”

Royal was 27 years old when he found out he was going to have his first child, a girl, Yali. In 2021, he welcomed a second child – who just happened to be another girl, Korus.

“Yali is just a different level of inspiration, especially when listening to her tell jokes. She is a hilarious little girl. She is an energetic, loving, and caring soul who is coming into her own,” he described his daughter, who, with her mother, currently resides in Norway. “In Korus, we can see what it means to be a joyful child. She rarely cries, and apart from that, she always ah show gum right through. As they grow older, I am learning their personalities, and it is a whole different level of relationship. It’s more preserving dem ting deh, protecting my girls, and allowing them to be the best with the right foundation.”

The more one listens to Home, the more it becomes apparent that he is also speaking about missing his firstborn, and he continues to teach the value of being home or having family around even in a time of global crises. “ Home is that song on the project for me,” he says, “I won’t say my favourite song, but it’s my favourite conversation because I’m speaking to both my daughters. A lot of times, as an adult we expect our children to automatically understand. To them, I am not Jesse Royal; I am just daddy. It’s not about Jesse Royal having a show in Mexico; it’s about daddy not being here on Saturday night or whenever.”

Royal added, “The conversation is an honest reminder to my daughters, and this is the purest love that forces me to be honest with myself. It’s not just about me any more. There are these two beautiful little souls who to dem, me a superman. My being Jesse Royal is not anything to them, is either daddy deh yah or nuh deh yah, and I’ve grasped a whole new level of understanding of the relationship and its meaning to my life.”

At both periods in becoming a father, Royal pushed himself to create music and a balance. He delivered the multi-layered début album Lily of da Valley after the birth of Yali, which topped the Billboard Charts and earned the artiste the title ‘modern-day reggae revivalist’. Returning with Royal a mere five months after Korus was born was not intentional, he said.

“I couldn’t have planned this; it is divine timing, the energy alive and what they provide. I’d be lying if I said I planned to get Kandi (King) pregnant and then release the album after. We have had to find a balance to be able to shelter and complement each other, but also allow each other the room that’s needed for us to wear all our hats. Even Kandi, I have such profound love and respect for her as an entrepreneur and incredibly talented individual who has businesses to tend to,” he said.

Quoting author and philanthropist Kahlil Gibran, Royal explained that the act of having children is basically “the universe longing for itself”, and as a man that puts his trust in the universe, he believes that fatherhood was bestowed upon him. “The author says ‘children don’t belong to us but come through us’ so I am the just the guardian that was given the job to ensure I guide and protect my girls in a way that when it’s time for the universe to use them, they will be ready because one thing is constant, I am growing old but more people will be needed to breathe air, plant and infuse love.”

“I’m not going to make my daughters feel this is a world with evil people with evil intentions because there is so much out there. Yes, we teach dem to deh pon dem guard but that the world is also a loving, caring place that gives you what you give out. As a man, I also know I have a lot of responsibility not only to my daughters but to sons – the other men out there. How are you going to prepare your daughter to protect herself alone? As a man who has daughters, I have to deal with every youth a road like a king. I can’t make him feel like him is a bum, and if he feels that way, the first thing him ah pick up is a gun, and if he feels he is not valuable to society, he will not even take account fi himself or consider certain action. It must be also, to teach the men, the importance of seeing his mother in every woman,” Royal concluded.