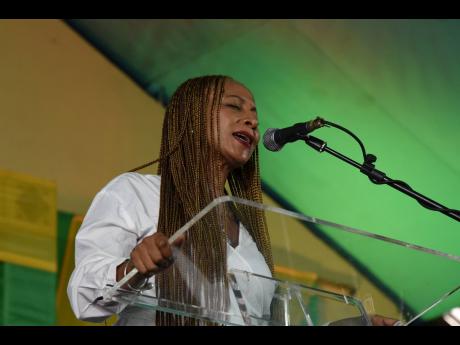 Reggae songbird Nadine Sutherland found herself among the mourners at the funeral of Justin Wallace in Far Rockaway, New York, last Monday. The journey was a long and reflective one, said the singer who, having first seen the news on television about Wallace’s death, found “it was difficult to digest” despite not being related to the family.

The NY Daily News reports that Justin, who was born to Jamaican parents Aretha and Albert Wallace, was fatally shot three days before his 11th birthday on June 8 at a family barbecue on Beach 45th Street near Beach Channel Drive in the Rockaways’ Edgemere neighbourhood. He was rushed to St John’s Episcopal Hospital, but had succumbed to his wounds.

“It was not until later [that] I realised that he was a student at the Challenge Preparatory Charter School (CPCS), which was the institute that I was employed to by Dr Les Mullings and became the director for the performing arts. I thought, ‘I must have seen him perform’, because the students had to be involved,” Sutherland shared with The Gleaner.

“When an adult dies, it is easier to process it, but a little youth at 10 years old … is so sad. Before even Justin’s funeral, I met with his mother and realised I know [some of the family], sitting there making some of the connections; it made me feel how small the world is. I don’t even think we understand the magnitude. I just wanted to be there for them,” she continued.

Justin has been described as a people person and a scholar, who would have graduated from CPCS in a few weeks to go on to middle school. Sutherland said she “wondered what type of human he is, the man who shot him, and how he feels”. “That man must have a family, too, but in the moment of rashness, he took up a gun and just fired it without a care. Genuinely, when I looked at people, I could feel the anger towards him,” she added.

Though Sutherland resigned from teaching at the school approximately three years ago, she acknowledged a request to sing at the funeral. Using her voice for the Wallace family, the song she suggested was Pairs of Wings. It was written and recorded for Garnet Silk when he passed away, she shared, but it was a fitting song for the situation. The first verse reflects the emotion of Sutherland and many New Yorkers following the incident.

“You know how much funerals I have had to sing this song at, but still it took everything out of me to sing it,” Sutherland admitted, adding that “I broke down when I rehearsed it, but I knew when I stepped in front of the mourners at the service, even though I was emotional, I had to go through the song without crying.”

The veteran singer said that the news from one community in New York “[captured] national attention as represented by the number of politicians, residents, oh, and police. For a time that has been horrific for black people, we have faced a severe amount of deaths by the lawmen, but here they were, there giving their support for the family”.

“This is a moment for Justin, I said to myself, but it is one where I will speak to my people to let them know this ‘bull crap’ has to stop in our communities. Especially back home in Jamaica, to hear of places like Tivoli, Jungle, and Denham Town, where turf wars are constantly instigated – and for what? Why people jus’ a fire shot and a rob people pickney suh? We as black people have to face ourselves, look at all the consequences of our actions,” Sutherland concluded.