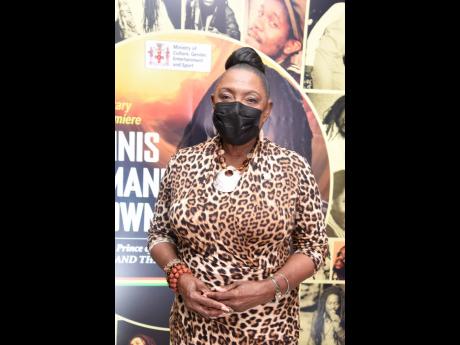 Nicholas Nunes/Photographer
Ministry of Culture, Gender, Entertainment and Sport Olivia ‘Babsy’ Grange said she hoped the documentary would be a message to others.

Ministry of Culture, Gender, Entertainment and Sport, Olivia ‘Babsy’ Grange, is hoping that the message embedded in the newly premièred Dennis Brown docufilm will resonate with those persons in the music industry who “find themselves moving in the wrong direction” and make them think twice and “maybe find a way to deal with this negative aspect of their lives”.

The documentary, Dennis Emmanuel Brown: The Crown Prince of Reggae; the Man and the Music, commissioned by the Ministry of Culture, Gender, Entertainment and Sport, with Grange as executive producer and Judith Bodley as producer, had its première last Thursday at the Little Theatre in Kingston. It is the first in a series from a minister who is passionate about Jamaicans documenting their own history.

“My intention is to commission a series of documentaries on the life of our cultural icons. We had commissioned it for Reggae Month, and then we decided to delay it and have it completed in time for July 1. It turns out that July 1 is International Reggae Day, and we at some point had to reopen the entertainment sector, and I thought it would be fitting to do it at that time,” Grange told The Gleaner.

The culture minister said the documentary “was important for us to commission” and gave kudos to Judith Bodley. “She did a good job. She interviewed many of those who had a relationship with Dennis Brown, and they really expressed the feeling and the passion that they felt.”

In her opening remarks, Grange said that she was sorry that she was not a part of the documentary but quickly added that it was no fault of the producer, but rather a matter of time. She spoke briefly about her friendship with “Little Dennis Brown as we called him,” who, like her, grew up in West Kingston.

Grange told The Gleaner that the documentary will be shown on Television Jamaica at a date to be announced, as well as across the diaspora and other places in the world where Dennis Brown was loved. She admitted that she saw the first edit of the documentary, but deliberately decided not to see the final edit until the première last Thursday. For her, it was poignant.

“They were touching moments, because, although Dennis Brown excelled and did so well as a writer and a singer, his life ended up in a very sad way. And so this docufilm, I hope, will also be a message to others that, as you live your life and as you express your creativity and you make Jamaicans and people across the world love you for your music and what you have done to enrich the genre of reggae and Jamaican music, you also have a personal responsibility to yourself to ensure that you don’t take on habits that could be detrimental to your health,” Grange said with passion.

According to Grange, “That message is loud and clear for many, now in the industry, who are affected by certain habits.” The culture minister told The Gleaner, “Dennis Brown was a perfect example of how great talent and a great individual’s life ended maybe much sooner than he would have anticipated because he went on a different path. But we love him, we respect him, we honour him, and tonight we pay tribute to him.”