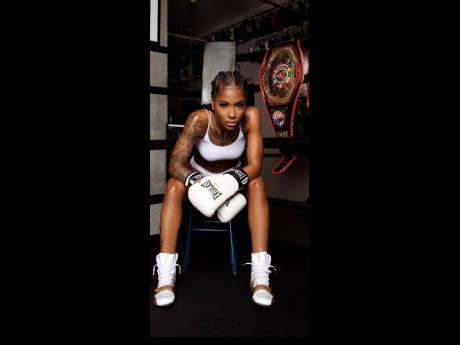 Contributed
Hood Celebrityy is well-known for being an artiste championing the dancehall scene in the United States, but she also has an interest in amateur boxing and brings her fighting spirit to the fore with her new single, ‘Champion’.

Hood Celebrityy doesn’t put too much emphasis on what critics have to say about her looks and choice of fashion, but the ‘prettiest tomboy’, as she calls herself, is earnest about championing a sound and an image that she wants her fellow Jamaicans to support.

She shared, “It means a lot to me to have an audience in my beautiful country because that is my roots. It is where I was born and raised till I was 12 years old. Once a person has the support from their home, that’s already a blessing. Everything I do starts with Jamaica - the roots.”

Hood Celebrityy celebrated her 30th birthday yesterday, and while she has had many reasons to celebrate over the past month, the New York-based artiste is still on a high off seeing her face on a billboard in the middle of Times Square alongside Machel Montana and Skip Marley on the heels of releasing her latest single, which she believes is appropriately titled Champion.

“It’s a dream. It is one of the many things I have wished for my career. My head space was in champion mode while writing it, telling myself no one could stop me but me. I will never fail if I never stop. I’m a winner, and I will push hard every day to make sure of that,” Hood Celebrityy said.

“So it’s not a coincidence (the title of the track) because I really just enjoy writing music that uplifts and empowers people. We all could use the positive affirmations. It took me a day to write this record. I have released it two years later, and I expect that once heard, all will feel like winners in their hearts. In my eyes, we are all champions. We just have to feel it, find it inside, and believe it,” she continued, with a personal message to athletes heading off to the Olympics that “a champion is someone who never gives up. No matter what, they keep going.”

Hood Celebrityy says she is grateful for the love and support she has been receiving over the past three years and promised to continue paying homage to Jamaica and the pioneers of reggae and dancehall.

“I love the fact I have support from other reggae-dancehall acts because I support everyone that’s pushing the music for the culture. We all one. A big shout-out to all the legends, like Bounty Killer, Beenie Man, Mr Vegas, Tony Kelly, Dave Kelly, and Wayne Wonder, and the list goes on, that were supporting me with all the freestyles I have done during the pandemic. I’d love to collaborate with a long list of artistes in Jamaica and can’t wait to go back so that I can work with them,” she said.