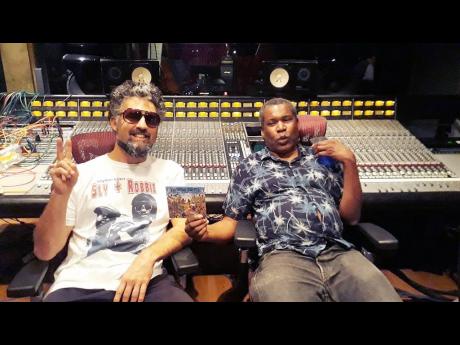 Argentinian Hernan ‘Don Camel’ Sforzini has been promoting, playing, recording and producing reggae since 1990, playing percussion for reggae bands in his homeland, as well as for Israel Vibration, UB40, Steel Pulse, The Abyssinians, The Congos, and Don Carlos.

For this South American reggae ambassador and percussionist to enjoy reggae music, “dubbing”, as Pablo Moses says, “is a must”. Sforzini is hooked on this style of music formed from reggae in the 1960s and 1970s, using electronic drums and sampled bass. “Dub got listeners all around the world,” he told The Gleaner. “I like the new dimension that opens the reconstruction of the songs. Dub takes me to another dimension; it makes me fly, and also makes me discover sounds that I did not appreciate before. I discovered dub for [the] first time with an album of Lee Perry and Mad Professor Mystic Warrior and Mystic Warrior Dub. When I listened the B-side, I said: ‘What [is it]? It is crazy!’ I discovered dub on a trip to Brazil when I was, like, 15 years old,” he recalled.

Sforzini, whose production credits include El Album Verde and HEMP!, is working on a trilogy of dub albums, the first of which was released in 2019 and was nominated for a Grammy Award. “In 2019, we released Sly & Robbie vs Roots Radics: The Final Battle, which includes a lot of reggae legends in an epic clash with both great reggae bands. The nomination was a surprise! Never imagine it! It was a gift for all the legends that participate in the album … well deserved. Many of them [had] never been recognised before, so the time has come. That album was recorded in Jamaica and Argentina – with Sly & Robbie, Horace Andy, Ken Boothe and Lee Perry in Argentina, and Roots Radics and the rest in Jamaica. We mixed and mastered the album in Argentina,” Sforzini shared.

He pointed out that the Grammy nomination for reggae meant a lot to him and to Argentina. He and keyboardist Sidney Mills, who played on two of the songs on the album, attended the awards at Staples Center in Los Angeles. That year, Koffee took home the trophy.

The producer, who visited Jamaica in February of 2020 and presented the album at the Kingston Dub Club, was also fêted by the Argentinian Embassy in Kingston, which hosted a get-together with many of the musicians involved in the album. “They gave us all recognition certificates,” he said proudly.

Sforzini is now busy assembling the second album – Sly & Robbie vs Roots Radics: The Dub Battle – which again features the rhythms of the legendary ‘Rhythm Twins’, as well as the internationally acclaimed Roots Radics band. A dub aficionado in the truest sense, Sforzini said he was happy to share that the Dub Battle album is dedicated to the life and legacy and “in loving memory of those we have lost,” among them Toots Hibbert of Toots and the Maytals, Bunny ‘Striker’ Lee, King Tubby and Daddy U-Roy. Dub Morning is the first cut off the soon-to-be-released album.

The Dub Battle is promoted as the first album in history that reunites all the dub creators and engineers in one project – King Tubby, Lee ‘Scratch’ Perry, Bunny ‘Striker’ Lee, Scientist, King Jammy, Mad Professor and Dennis Bovell.

Sforzini is beside himself with joy. “Well, the dub side got to be like no other dub album before,” he said matter-of-factly. “The surprise was that Bunny ‘Striker’ Lee contributed two dub versions, unreleased from King Tubby, that he had in his treasure vault, one with Sly & Robbie and one with Roots Radics. It was a blessing. To get Tubby involved in this project is like a dream. So, we got four generations of dub creators in it,” he beamed.

The Cultural Battle will close the album trilogy, and while Sforzini is playing his cards close to his chest, he revealed that Big Youth is involved in the project, as well as the late Daddy U-Roy, who contributed his very last recording. “I recorded U-Roy in February 2020. It was a great session! One day I was recording Big Youth over a Sly & Robbie riddim, and next day, U-Roy over a Roots Radics riddim. An unforgettable moment!” said the producer, who has visited Jamaica on three occasions and who declares that “it feels like home”.

Is he possibly hoping for a Grammy win for Sly & Robbie vs Roots Radics: The Dub Battle?

Sforzini stated, “It is a nice opportunity for the Grammys to recognise all of the dub masters and also the style. Dub was never recognised at the Grammys, so here they are Knocking on (Dub) Heaven’s Door.”