Names Roy Rayon’s ‘Give Thanks and Praises’ among his favourites 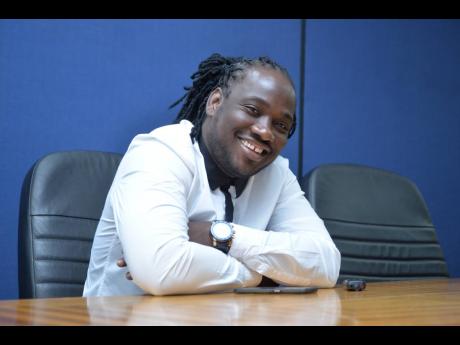 Singjay I-Octane is keen to bridge a perceived generational gap between the 55-year-old Festival Song Competition and the current crop of dancehall and reggae artistes, and he says this is one reason for his entry in the 2021 contest. Noting that he has matured, I-Octane acknowledges that with maturity comes responsibility.

“Festival had become monotonous. We ah listen songs from we ah 10, but by the time we turn 20, is like we become detached from it. Is like this competition is for a different generation, but that is not so. This is our heritage and our culture, and it is for everybody, so it was important for me this year to take some time and focus on putting together a song for Festival,” he stated, adding that it was not about the money.

This year, the prize package is $3 million, to be shared among the songwriter, the singer and the producer.

The Lose a Friend singer’s wave of consciousness was also sparked by last year’s competition, which saw established acts such as the late Toots Hibbert, Freddie McGregor, Buju Banton, Papa Michigan and LUST throwing their hats in the ring. Buju emerged the winner with the song I am a Jamaican.

“When you in the fast lane, you don’t have any time; but COVID come and slow down the world, and the only thing we have a lot of now is time. Last year, Buju Banton and Freddie McGregor entered the Festival Song Competition and made a difference. This year, I have entered, but I am coming different with my song, Land We Love. It’s not the regular Festival song, and I am confident that it is going to do very well,” he declared, laughing as he stopped short of claiming the title for himself.

I-Octane, who has had a passion for Festival songs since he was a boy growing up in Clarendon, names Give Thanks and Praises, Roy Rayon’s 1987 winning Festival song, which celebrated 25 years of Jamaica’s Independence, as one of his all-time favourites. And he was able to sing it lustily, almost word-for-word. Since being named one of the 12 finalists this year, he has been enjoying the Zoom meetings with others in the group, and he refers to himself as ‘The Vibes Man’.

“We are a group of people who don’t really know each other, so it come in like me is the gel, the vibes man in the group who can always bridge that gap and keep the mood light and happy. This is a great move that I took to enter the contest. Maybe next year, we have a Konshens, then a Chronixx and a Koffee, and a Wayne Wonder will jump in. That way, the young artistes get to interact on a different level with established acts and learn from them, and they can teach us something as well. That can only make the music business better. It come in like the younger youth don’t have any real mentors. Me have my own career, new album and music dealing with, but it was important to stop and enter the competition,” he told The Gleaner.

The Ministry of Culture, Gender, Entertainment and Sport has announced that the songs vying to become the Jamaica Festival Song for 2021 are now available for download and streaming on Apple Music, Amazon Music, Tidal, Pandora and Spotify. The album, Jamaica Festival 2021 Song Competition, went live last weekend. Last year was the first time in the history of the competition that the finalists were exposed on global streaming platforms as part of plans by the minister, Olivia Grange, to revitalise the contest.

The longest-running original song contest in the island, the Jamaica Festival Song Competition started in 1966 and has become a showground for aspiring artistes, songwriters and producers to showcase their talents, and aims to identify a new and original song that is reflective of the spirit of the Jamaican people.

The song provides a musical backdrop for Jamaica’s annual Emancipation and Independence celebrations. Toots and the Maytals, Eric Donaldson, Desmond Decker, Roy Rayon and Stanley Beckford are among former winners who have made their mark globally.

The 2021 Jamaica Festival Song Competition is sponsored by the CHASE Fund, Digicel and the Jamaica Biscuit Company.