Naomi Cowan’s making waves and catching them, too 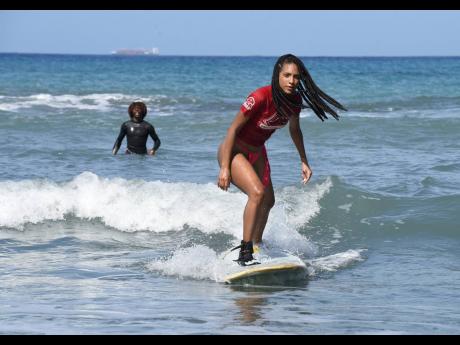 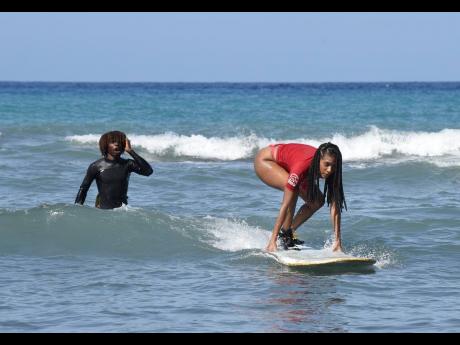 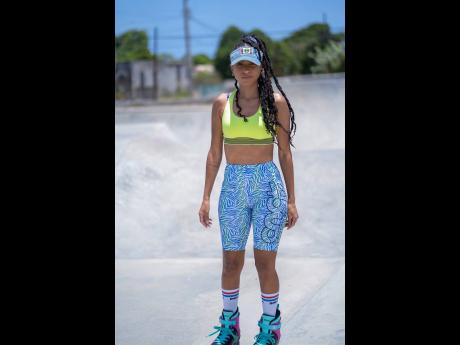 Naomi Cowan is out and about with her mixtape called Star Girl. The Paradise Plum singer-songwriter said that 2021 started with her pretending as if everything was okay when really, it was filled with anxiety.

“Coming off a year of uncertainty, where in a way it’s like a person cannot see the end of what is happening in the world, I had to conjure up a specific type of energy to do what I have to do, in order to continue what I do,” she said, almost speaking in a sort of code. “When I went into [the] studio, I had to just pretend like the world was … is not locked down, or as if the next day I was going to be on tour or something like that because if I was to follow what was happening on the outside, I wouldn’t be standing here in front of you.”

The on-the-verge artiste told The Sunday Gleaner she had to tap into a part of her that felt the freest and most expressive – that, of course, was music – the start of an adventure. The quest would include Leighton Paul Walsh, professionally known as Walshy Fire of the internationally acclaimed musical trio Major Lazer, navigating studio sessions and helping to make the rhythmical waves that Naomi would ride with her vocals.

“I think when Walshy presented the idea to me about doing a mixtape, truthfully, I was like, ‘This is a lot’. I thought it was crazy, but then we started to delve into the concept. It became a representation of so many aspects of my life. It’s the basis of my musical upbringing, so people are going to hear reggae and dancehall, but they will also hear R&B and pop because those influence how I sing and what I listen to. I don’t hear a reggae track and think that I have to sing in a reggae style,” she said. “It is a reflection of how my mind works - the fact that I don’t just think in one track or one space when I am writing and recording. I want the person listening to not only hear but see what has shaped the artiste that is me and who I am now. This project is a prelude and precursor to more projects.”

The Energy singer said that as a recording artiste and performer from birth, regardless of what is going on in her surroundings, she always transforms when it is time to get in front of a microphone and onstage. “There is something deep inside of me that I can pull out,” Naomi said, adding that, “maybe that’s what Star Girl means.”

One other avenue where the singer has found solace, new energy, and peace of mind between recording music is water sports – surfing, to be exact. Naomi mentions that she commuted from her home a few weeks ago, in part to sign up for a surfing lesson at the Jamnesia Surf Camp in Bull Bay and take in the soothing sounds of the sea.

She said, “I am a water baby; I have always loved swimming and the beach, so for me, the water is a place of peace and comfort. One of my reasons for wanting to try surfing is because I almost feel closest to God when I am by the ocean. It is very spiritual for me.”

It is 28 degrees Celsius; the sun is shining, not a rainy cloud in sight, and, as her lucky stars would have it, the waves are rolling at a steady pace on the day of her second lesson. Naomi revealed she does not mentally prepare for her lessons but that “more than anything else, it’s for enjoyment”.

“With surfing,” she explains, “it wasn’t a decision perse. I think there is a part of every person that wants to learn how to. Life is happening; why sit down and do the same thing every day.”

“Just try something new. I find doing physical actually that has a bit of a goal or something you can learn on the way more satisfying than going to the gym. I am not so much of a gym person, to be quite honest. This is one of my ways to stay active and be in touch with my body,” Naomi further explained.

Rollerblading is another physical activity the singer enjoys. She has got a few bruises, hit the ground – nothing too serious – but she says challenging herself in other areas makes her improve musically.

“With one, you are carried by wheels, and with the other, you’re carried by the water, so there is a bit of free flow. The difference is, on the water, you’re not facing a concrete floor, and you’re more open to falling and failing,” she said.

“When in the studio, recording something, in general, it does require a lot of that – letting go – to not be too focused on anything else happening in the outside world. If I have too much on my head, it is going to come out in my singing, and it’s the same thing when I am learning to surf; I can’t overthink,” Naomi continued.