Raise a toast to Deon Silvera ‘60 and feeling like 16’ 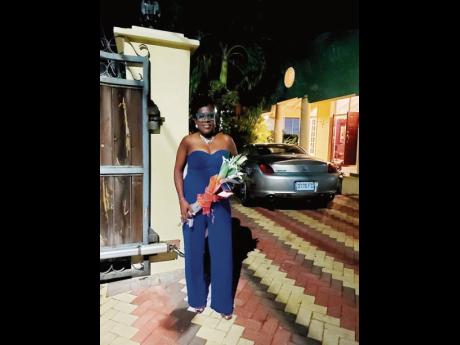 Contributed
Actress Deon Silvera dazzled in blue at a surprise party held to celebrate her birthday last Saturday in Norbrook. 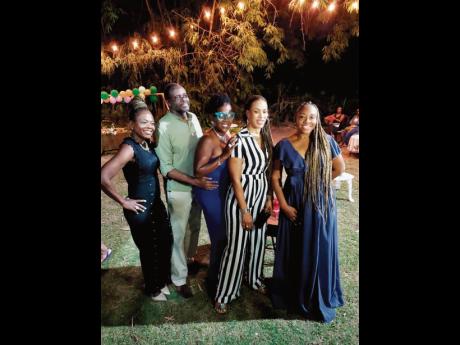 Actress Deon Silvera is fit and fabulous at 60 and declares, not surprisingly, that she “feels like 16”. The multi-award-winning actress celebrated her birthday on June 23, but a “surprise” party was held last Saturday in Norbrook, one of the many month-long events staged by friends to fête her. A hybrid affair, in keeping with COVID protocols, the in-person number of guests was limited, but it saw quite a few others joining via the Zoom platform to raise a toast.

The event was surely a test of Silvera’s acting capability, as, throughout the night, she was the life of the party, despite her being in the midst of mourning for friend and acting companion, Volier Johnson, who passed away suddenly the day before. It was his name that had headed the list of invited guests for Saturday’s affair.

In Chinese culture, 60 years marks one full cycle of life, and the 60th birthday is regarded as an important point as the beginning of a new life cycle. Silvera was more than ready to start anew. When emcee Silton ‘Maas Gussie’ Townsend innocently referred to it being Silvera’s 60th, she was quick to correct him from the sidelines, “16!”

“Years ago, when mi was like 10 and hear 60, it sounded old. But I don’t know what that number is. Me can do all that a 16-year-old can do. But I have to really pause and give God thanks because we tend to talk and don’t remember the Master. To God be the glory, 60 is just amazing. People are shocked to know my age and are calling me asking if it’s true,” Silvera told The Gleaner, happily.

And she is enjoying the offers that continue to roll in from friends to celebrate, having already had the time of her life at an all-inclusive in Montego Bay, arranged by close friends, and looking forward to fish at Port Royal and a trip to her home parish St Mary, courtesy of another set of well-wishers.

“I am happy that I am loved. This is bittersweet. Yuh see what happen to mi big, nice friend. I miss him so much,” she said, referring to Johnson.

Resplendent in blue, Silvera dazzled on the dance floor last Saturday evening, accompanied by Lenford Salmon, who was the announced winner of a raffle which nobody present knew anything about, and they made their concerns known. The prize was the first dance with the birthday girl, not to recorded music, but rather to the sounds of singer and musician, Chris McDonald, performing I am Your Angel. Also on the programme was comedian Leighton Smith with a bag of jokes, and colleagues paying tributes.

According to Lenford Salmon, Silvera was a “true friend”, and he shared how when he and his first wife had their first child, “Deon came by and washed baby clothes”. He added, “You can’t measure those things. We love and appreciate Deon.”

Actor Titus stated boldly that he and Silvera “go way back” and had even shared the same bed. He then explained to the curious what he meant, “At a lady living room in New York when we decide to do higglering.” He also hailed her as a true friend, pointing out that since he started his “little leather business”, Silvera has been his best customer. “Deon buy one, then a second and then she order a third, till me haffi seh, ‘No Deon man’. But ah still going to sell her,” he declared.

The birthday girl, in her response, noted that she was truly humbled by the outpouring of love.