Yasus Afari and daughter MiK do it ‘Plain and Simple’ 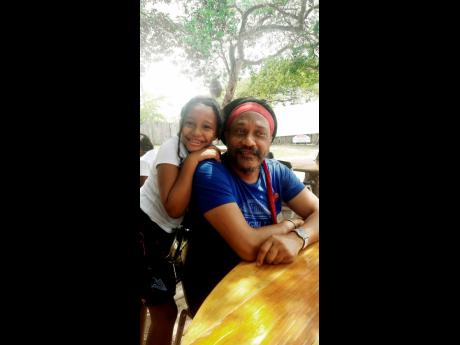 Nine-year-old poet and songwriter Mikaya ‘MiK’ Sinclair is poised and articulate, plain and simple. But don’t be fooled by her seemingly no-fuss persona; she is ready and able to kick up a storm. The youngster recently co-wrote her first song, an uplifting empowerment ode that puts a light spin on a heavy topic.

Titled Plain and Simple, the single makes a strong statement against abuse in all its forms. “Oonu cyaan violate fi wi temple! Mek mi tell oonu dat plain and simple!” is the punchline of the song, which now has its own hashtag, owing to a highly visible online challenge, which sees fans uploading videos of themselves reciting the line with all the passion and facial gyrations that they can muster.

MiK, the daughter of dub poet and entrepreneur Yasus Afari, with whom she collaborates on the track, is delighted at the impact the song is making.

“My father came up with the idea, and it took us less than a week to write it. I am happy that a lot of people like it,” the confident Mona Prep student told The Gleaner. “We want everybody to get it, that you can’t just go around and violate other people. That is something that doesn’t need any explaining; it is just plain and simple.”

Proud dad Yasus Afari, who shares a close bond with Mik, said he discussed the song with her, and she gave him her own suggestions, which he incorporated. Part of the inspiration for Plain and Simple, he says, is the “decline of the family values in Jamaica and the world, which is evident in the attack on women, children and the family”. Yasus is known for his “edutainment” – a combination of education and entertainment – and Plain and Simple fits perfectly into that space.

“It is social commentary and examines important issues in a fun, respectful way,” he explained.

This father-daughter collaboration is a loud statement on family values and relationships. Mik describes her dad as “good and kind” and added that he “says nice things to me”.

Yasus says of his daughter, “MiK is respectful, disciplined and focused. She is a child who you can reason with, and she understands. We really don’t have any disciplinary problems with MiK.”

The duo now has an official name, MiK-YA, and they will more than likely be churning out more collaborations in the future.

“I have written lots of poems, but this is my first song, and it is very exciting. I write poems kind of randomly; however, I would recommend poetry-writing to anyone, as it is really a good way to say what is on your mind and have fun with words. I like all of my dad’s poems very much. Two of my favourite would be Dem Way Deh and Black Majik,” MiK shared, adding that she also likes performing.

A performer in her own right, she recently co-hosted the 18th annual Poetry in Motion 2021. A virtual event, it was streamed live from the Manchester Golf Club, Mandeville, Jamaica, in February. MiK has also graced the pages of several issues of the Art of Life magazine.

The well-rounded youngster, whose favourite subjects are communications task, mathematics and phonics, says she is thrilled with the #PlainandSimple challenge. Utilising the hashtags #PlainandSimple, #Empowerment and #PlainandSimpleChallenge, it has connected with fans of all ages and genders across multiple platforms, including Facebook, Instagram, YouTube, Twitter and even Tik Tok.

“With 1,000s of people supporting the Plain and Simple Movement, it’s rapidly becoming a Plain and Simple village with challenges from Canada, UK, USA, Europe, Africa, the wider Caribbean and here at home in Jamaica,” a release stated.

Yasus Afari’s SenYAcum Records joined forces with Zojak Worldwide for the June 4 virtual launch and release of the Plain and Simple single, which is now available on all digital platforms.