Food For The Poor Band Camp gets under way 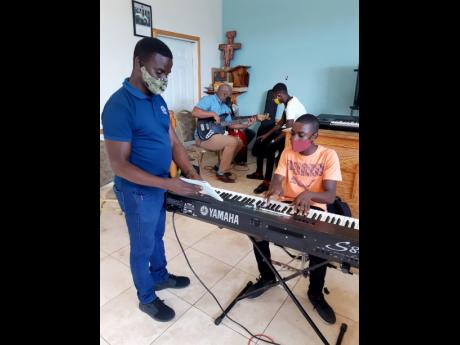 This year, 20 students will be trained at the Food For The Poor Jamaica’s Band Camp project. Entering its 12th year, the programme teaches young people to play a variety of musical instruments.

The initiative is spearheaded by the charity’s Prison Ministry department, which includes Jeffery Brown, band camp instructor, who has been giving one-on-one training to the students. Since its inception, the project has provided musical training to over 300 students, several of whom have returned to participate as instructors themselves and to be part of an in-house band that has been an outgrowth of the project.

In this way, the band camp programme mirrors Venezuela’s renowned El Sistema music training, which emerged from the mind of visionary musician and economist Jose Abreu.

He may not enjoy the name recognition of his Latin counterpart, but Jeffery Brown is every bit as committed to delivering quality music education in a fun environment over the short term. “It is a pleasure to educate the minds of young Jamaicans and teach them a skill in the field of music, upon which they can capitalise and start their careers. It is my hope that they will use the skills learnt for a lifetime to their benefit and that of their families,” Brown said.

He added that he encouraged the students to continue practising with the instruments they were given and play at their churches and in their school bands so as to enhance their talents.

The three-week, non-resident Summer Band Camp takes place daily from July 19 through August 21 on the grounds of the charity organisation’s offices in Ellerslie Pen, St Catherine. At the camp’s annual graduation ceremony, participants are gifted with the instruments they learnt to play.

Speaking at last week’s opening ceremony for the camp, Food For The Poor executive director, Craig Moss-Solomon, said the project is a testament to the power of music as well as teamwork and regeneration.

“We recognise the benefits of band camp to provide students with the skill of playing a musical instrument as well as empowering them with a sense of belonging and pride. To see them move from novices to being able to play music is a true blessing for us at Food For The Poor each year. We look forward to seeing them grow and move from one stage to the next,” Moss-Solomon said.

Previous seniors from the Band Camp have enjoyed success in the JCDC music competition, earning medals of every colour, in addition to individual titles.