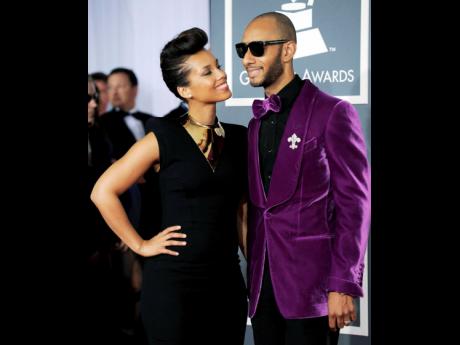 Alicia Keys has paid a sweet tribute to husband Swizz Beatz as the pair celebrate their 11th wedding anniversary.

The Empire State of Mind hitmaker took to Instagram last Saturday to mark the couple’s special day and said their relationship is “just getting better”.

Alongside a snap of herself covered in body paint while embracing her record producer partner, Keys wrote: “Soulmates. Deeper than soulmates. Twin flames. An existential earthquake. My souls mirror. All these are good but still not strong enough to describe our precious,precious love!!

Alicia first meet Swizz, whose real name is Kasseem Daoud Dean, when the pair were teenagers in New York City, but she revealed that she wasn’t romantically interested in him until years later.

The 40-year-old singer recalled in her book, More Myself: “We ended up in the same circles at various awards shows and industry events.

“He’d usually pull up in some fancy car, rolling deep with his Bronx crew and shining with diamonds. I wanted nothing to do with that scene or with Swizz.”

She explained how her feelings began to change when the pair worked together on a music project and she noticed the “depth” to her partner.

“The more we talked, the more I noticed how his mind worked. Beyond the baggy jeans and arm tats, there was depth. He was so aware of what was happening around the world,” she said.