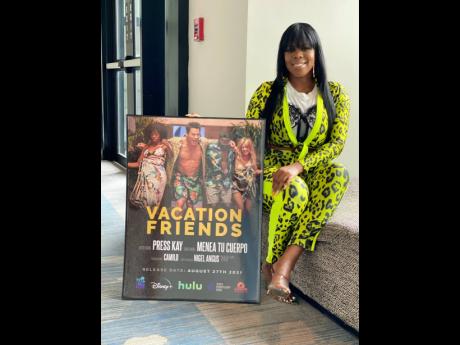 Contributed
Press Kay poses with a plaque for ‘Vacation Friends’ from Hulu.

Kaylia Williams is eyeing the film and television industry closely, even more now than she has throughout her career as a TV host and personality. Known professionally as Press Kay, her playground has primarily been the music and entertainment field, wearing different hats, including recording artiste and publicist, and always representing team dancehall. In 2017, she recorded a song titled Menea tu Cuerpo with the Mexican Institute of Sound (Instituto Mexicano del Sonido) for the Disco Popular album, which is now on the soundtrack for the American comedy Vacation Friends, which is to première on Hulu today.

“I feel so elated and extremely blessed to know the song is being featured on the soundtrack for a movie. Also, knowing that out of the entire album that featured so many greats like Sly and Robbie and Toots and The Maytals, as well as several Spanish acts, my track was selected,” Press Kay told The Gleaner.

The movie cast includes professional wrestler and actor John Cena; award-winning actress Lynn Whitfield, who starred as Lady Mae in the Oprah Winfrey Network dramatic series Greenleaf; and Daytime Emmy Award nominee Meredith Hagner from the soap opera As The World Turns. The upcoming film, directed by Clay Tarver, who also co-wrote the screenplay with Tom Mullen and Jonathan Goldstein, is about two couples who meet while vacationing, but their friendship takes an awkward turn when one couple crashes the wedding of the other.

Press Kay, a fan of romance films and television series, says the movie should be interesting, and she is anxious to see how the song is fitted into the storyline.

“The connection with the producer, Camilo Lara, and his team, was first made via engineers at Big Yard Studios, and when they played me the beat, there was an instant light-bulb moment. I was like, this is my thing, and of course, I was able to get creative and put the chorus in Spanish while still keeping the authentic Patois in the mix,” she said. “Knowing I was working with the Mexican producers, I wanted to definitely bridge the musical genres so people can appreciate the music more; it is more tasteful and palatable.”

She said that she has concentrated on the Spanish market for many years, taking a business and marketing approach to getting her music on the international scene. With Come Fi Di Knockaz, a collaboration with Charly Black, she gained popularity in Columbia, El Salvador and Costa Rica.

“Jamaica is known for dancehall, and that is why persons keep coming here to do music; but it is important for us to spread the culture. I knew this was going to be special because they are big on promotion and travel extensively to put in the work and expected it to be big. I didn’t know it was going to be in a movie, but it is a big accomplishment for me and will boost our music culture even more,” Press Kay said.

“I’d love to do more collaborations and recordings with that Latin flavour, because it’s a type of energy people enjoy about my music, and that is where the money is at! I will still bring my style and flow, even on a Spanish, or what we know as reggaeton, rhythm,” she continued.