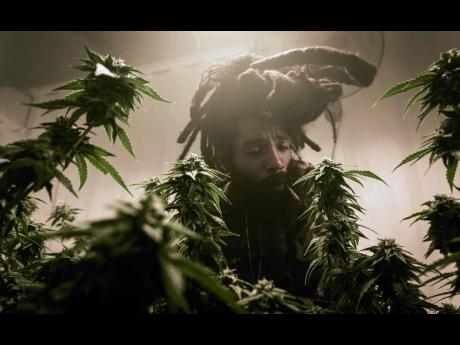 Contributed
Selector-turned-recording artiste Yaadcore in a behind the scenes shot from his new single, ‘Nyquill (Spliff A Light Spliff)’. 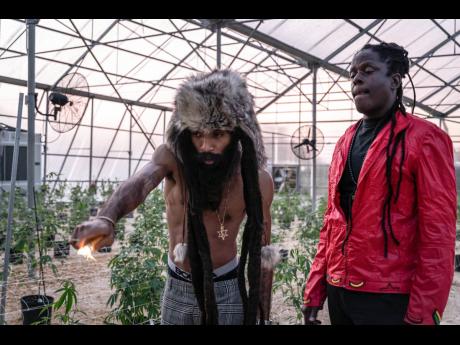 Contributed
Yaadcore (left) and Richie Spice, who is featured on the remix of ‘Nyquill (Spliff A Light Spliff)’.
1
2

Yaadcore has followed up The Calling and Tension with a ganja-heavy song that pays tribute to the medicinal properties of cannabis while making a clear call to action against the fight the plant has faced. And if the original single, Nyquill (Spliff A Light Spliff), was not poetic enough, he recently invited veteran reggae singer Richie Spice to create a psychedelic remix, the audio-visual production for which was premiered on High Times, dubbed the cannabis culture bible.

“Mi feel good, enuh,” Yaadcore told The Gleaner about the recognition he has received from the US-based magazine that for over 30 years has shed light on counterculture ideas and the news around — and advocated for the legalisation of marijuana.

He added, “It’s a blessing to know that as a reputable marijuana resource, they are receptive to my music and to what I have to bring to the table.”

He said that Jamaican reggae artistes are unrivalled in their advocacy for the legalisation of cannabis, its usage, and in educating listeners of their music on the benefits of such usage for decades. Even now, with the decriminalisation of the sacred herb locally, many are laying claim to lifting its status from forbidden to favoured, and like Yaadcore, a few remain dedicated to sharing the knowledge of all that it is capable of doing. Thus, it cements the title of international ambassador and advocates for cannabis culture.

“I am 100 per cent an ambassador for cannabis culture. Marijuana is a plant that I believe should be freed from all forms of oppression. We see where people are being faced with all types of stipulations for the usage of it. Granted we are allowed access to a certain amount without being penalised or harassed by the law and me give thanks for that, but you know, the small farmers and sellers are still dealing with issues,” he said.

“It should be treated like any other plant, just like an onion or garlic. It means so much to me, based on the medicinal benefits and the spiritual elements of its use. In the times of coming up, I learnt how marijuana reveals us to ourselves and makes me personally feel more comfortable in being who I am, and as far as Rastafari is concerned, it is one energy that gave me refuge into knowing that it is not something bad even with the stigma attached.”

Yaadcore, born Rory Cha, revealed that as a child, his parents naturally discouraged him from consuming marijuana, specifically smoking marijuana, but he was always more open to the medicinal properties of the plant.

“My father never like the smoking, but that was one excuse to hold on to the knowledge that smoking is bad for you, but it has other uses, and with its decriminalisation, we see where people who were strict, or unsupportive of it, have become more accepting. I discovered that it calms my nerves and helps to unleash creativity - mostly Indica or hybrid. I find they are stronger,” Yaadcore explained.

He further explained that Nyquill (Spliff A Light Spliff) was a song conceptualised in one of those moments of creative liberation.

Yaadcore said:“I wanted to show medical reference to marijuana, and that’s even how the name Nyquill came about, knowing it is a pharmaceutical product that helps to alleviate certain things but also makes people relax and sleep. It’s just highlighting the medicinal side of cannabis, saying like a Panadol, don’t fight it. And at a time of thinking of an idea to give the song that extra push, I called up Richie Spice, and we recorded the remix.”

The selector-turned-recording artiste and Richie Spice complement each other vocally on the neo-roots rhythm that is bound to be a positive stoner anthem. While windblown ganja fields have been a staple backdrop in music videos of reggae artistes, the Fernando Hevia-directed production is set in one of Jamaica’s state-of-the-art indoor farms, heralding a new era in which marijuana can be treated as an invaluable contributor to the island’s economy and tourism.

Next to musical models for cannabis advocacy, Yaadcore is conjuring up a 12-track album titled Reggae Land, which is part of the groundwork for his career as a recording artiste as he transitions from being on tour as a disc jockey for some of the reggae revivalist artistes like Protoje. He recently wrapped up a mini-tour on the US East Coast, across New York, and California.

“It is definitely challenging but easy at the same time. Making a transition in anything comes with a challenge, and it is not easy to convince people that you are somebody else. So over time, the quality of the songs make an impact. For me, after the first, like, three to four songs, I see a different reaction to the sceptics, and naturally, I gain new fans who have no knowledge of my DJ history. Give thanks bit for both,” he said.

“My career as a selector really has given me an understanding of what can work or what the people like, and playing music becomes inborn. It shows me the end product. Seeing people’s reaction to the music increases my knowledge and enhances my production so I can speak to them lyrically. People can definitely expect a lot more,” Yaadcore continued.